OUT OF BOUNDS AT ALL TIMES AND NO EXCEPTIONS

Father Juan Antonio sighed but indicated that he should ask it and then that would be an end matter and no arguments.

Jordi thought about his question, wanting to phrase it exactly right this time, just in case it came out as being rude or unco-operative. “Who are all those people outside? “ he said finally.

Father Juan Antonio tilted his head to the left, looking a little confused by the question. “Soldiers, Jordi” he said.

‘And secretaries. Staff workers. You’ve seen them all before, of course.’

‘No, not them,’ said Jordi. ‘The people I see from my window. In the huts, in the distance. They’re all dressed the same’

‘Ah, those people’ said father Juan Antonio, nodding his head and smiling slightly. ‘Those people……well, they’re not people at all, Jordi.’

Jordi frowned. ‘They’re not? He asked, unsure what Father Juan Antonio meant by that.

‘Well, at least not as we understand the term,’ Father Juan Antonio continued. ‘But you shouldn’t be worrying about them right now. They’re nothing to do with you. You have nothing whatsoever in common with them. Just settle into your new home and be good, that’s all I ask. Accept the situation in which you find yourself and everything so much easier’.

He opened the door and Father called him back for a moment, standing up and raising an eyebrow as if he’d forgotten something. Jordi remembered the moment his father made the signal, and said the phrase and imitated him exactly.

He pushed his two feet together and shot his right arm the air before clicking his two heels together and saying in a deep and clear a voice as possible- as much like Father’s as he could manage- the words he said every time he left a soldier’s presence.

‘Arriba España’, he said, which, he presumed, was another way of saying, ‘Well, goodbye for now, have a pleasant afternoon.’ 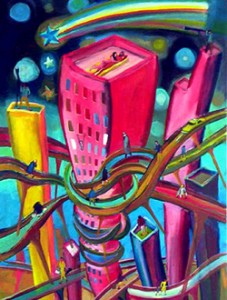