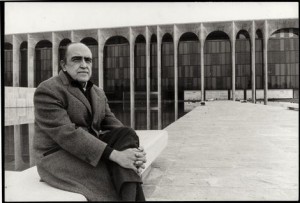 After complications from a previous kidney condition   Brazilian architect Oscar Niemeyer has passed away at Rio de Janeiro’s Samaritano Hospital.

For 104 years, Oscar Ribeiro de Almeida Niemeyer Soares (December 15, 1907 – December 5, 2012) lived a life of “intensity.” Born in Rio de Janeiro, he is best known for helping to design the United Nations Headquarters in New York in 1947 and for designing much of the city of Brasilia. As he described his style:  “I consciously ignored the highly praised right angle and the rational architecture of T-squares and triangles in order to wholeheartedly enter the world of curves…” He received the Pritzker Prize in 1988.

Niemeyer was one of those few architects who is recognized and admired by people from all walks of life, especially by those in his native Brazil, where he is considered an icon. Indeed, always motivated to design for his fellow man, Niemeyer was a Brazilian first, and an architect second.

In Niemeyer’s words: “It is important that the architect think not only of architecture but of how architecture can solve the problems of the world. The architect’s role is to fight for a better world, where he can produce an architecture that serves everyone and not just a group of privileged people.”

The legacy of the Master of Brazilian Architecture