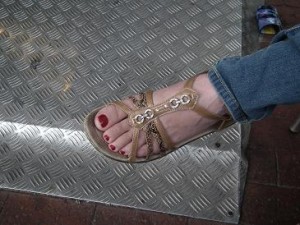 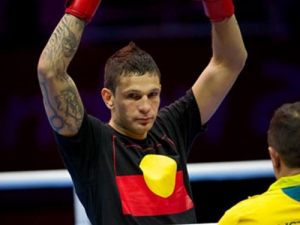 Damien Hooper deserves vocal support for wearing a t-shirt bearing the Aboriginal flag into his first boxing match at the London Olympics. In Hooper’s own words “I’m Aboriginal, representing my culture, not only my country, but all my people as well.”

The Australian Olympic Committee (AOC) has forced Hooper to apologise and to commit to only wearing his Australian team uniform in the future. Many, including boxing officials in Australia, have criticised the “overreaction” of AOC. But the disciplinary action reveals not just an overzealous bureaucracy, but the nasty chauvinism underlying the London games.

Upon entering the ring Hooper was reported to the International Olympics Committee (IOC) for breaching Rule 50 of the Olympic Charter, which prohibits any kind of “demonstration or political, religious or racial propaganda in any Olympic sites, venues or other areas”. Of course this rule does not apply to major sponsors or the governments of member nations.

Olympics authorities have gone out of their way to protect the exclusive rights of sponsors to plaster their logos across London. In the same way the IOC seeks to protect the “branding” of powerful nations participating in the games. This means silencing the voices of oppressed groups whose beliefs or very existence calls into question the legitimacy of competitor nations. Most infamously the IOC stripped Black American runners Tommy Smith and John Carlos of their gold and bronze medals at the 1968 games for raising their fists in a Black Power salute on the podium in solidarity with the US civil rights movement.

The rank hypocrisy of Hooper’s censure is put into relief by the constant celebration of all things British at the Games. The opening ceremony was an epic three and a half hour whitewash of history’s bloodiest colonial empire which was widely applauded as an “irreverent, but never disrespectful” celebration of the “quirky” Brits. Damien Hooper’s celebration of his people’s survival of a genocide initiated by Britain flies in the face of this cosy image.

Like the empire that spawned it, the Australian nation is built upon genocide and dispossession. Flags symbolising this fact are emblazoned on the national team uniform, raised at the moment of any victory, and waved by thousands in the crowd. Yet it is Hooper that is guilty of displaying “political or racial propaganda”. As fellow Aboriginal boxer Anthony Mundine put it in his defence of Hooper,

We want to be proud of a flag that we fly. How can we be proud as Aboriginal Australians and see the sight of the Union Jack and what that flag has done in the past, the genocide the rape and the murder and the stolen children? I can’t stand for that. That’s why I never fly that flag at my fights.

To that history we could add the ongoing genocidal policy of the Northern Territory Intervention, which is seeing more Aboriginal communities pushed off their land, and a new generation stolen from their parents.

The AOC, however, certainly believes that the Aussie flag is worth fighting for. The Committee has a long history of disciplining athletes deemed to bring the team (and by extension the nation) into disrepute. A little-known side story to that of Smith and Carlos is Australian runner Peter Norman, who shared the podium and wore a badge in solidarity with the Black athletes.

For this gesture of solidarity, Norman was ostracised by the Australian Olympic community for the rest of his life. Despite to this day holding the Australian record for the 200 metres, his name is never mentioned in the list of the country’s sporting greats. (Norman’s record of 20.06 seconds, set at the Mexico games, would have won gold at the 2000 Sydney Olympics, and placed fourth in the final at the last two Olympics in Athens and Beijing.)

At the 1994 Commonwealth Games the team leader Arthur Tunstall (now a life member of the AOC) attacked Cathy Freeman for carrying the Aboriginal flag on her victory lap after winning the 400 metre sprint. Freeman defied Tunstall’s ban on the flag and carried it again after winning the 200 metre race. The AOC attempted to rehabilitate itself after this controversy by inviting Freeman to light the flame at the Sydney 2000 opening ceremony. But with the Hooper t-shirt controversy they have reverted back to their racist ways.

There has been a massive outpouring of support for Hooper. Hopefully he will take heart from this support, and we will see him in the red, yellow and black again in the near future. We need another sporting hero who wears a flag actually worth cheering for!