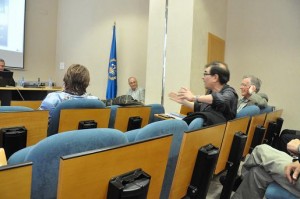 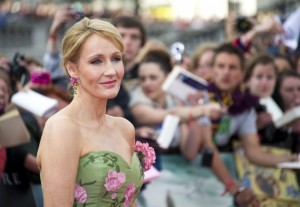 Com per a continuar comprant-li llibres !

By Shannon Greenwood June 12, 2014 at 10:30 am
Nestled in a graveyard in Edinburgh, Scotland is the tombstone of Thomas Riddell Esquire.

Though he died at the turn of the 19th century, his grave has brought a recent influx of 21st century visitors to Scotland — the fans of J.K. Rowling’s Harry Potter series.

Rowling has lived in Edinburgh for over two decades and accredits the grave as inspiration for the name of her character Tom Riddle, known more commonly as Lord Voldemort. Rowling wrote Harry Potter while living in Scotland, and the series shot her into worldwide notoriety and helped her become the first author to become a billionaire.

On Wednesday, Rowling, who still calls Edinburgh her home, announced that she’s donated £1 million to Better Together, an anti-independence campaign in Scotland.

“I came to the question of independence with an open mind and an awareness of the seriousness of what we are being asked to decide,” Rowling wrote on her blog. “I wanted to write this because I always prefer to explain in my own words why I am supporting a cause and it will be made public shortly that I’ve made a substantial donation to the Better Together Campaign, which advocates keeping Scotland part of the United Kingdom.”

Her move is bold in a nation where talks of independence are swirling and a referendum is being held on September 18th to decide if it will separate from the U.K. The movement is being led by the Scottish National Party who won a majority in the Scottish parliament in May 2011 running on the promise to hold a vote on separating. Scotland has been a part of the U.K. for over 300 years, and the referendum could mean independence again for its now 5.3 million citizens.

A majority of voters would have to vote yes in order for Scotland to secede, and currently polls suggest that number is close to 40 percent. Rowling is not one of them.

She cites having to navigate “the same twenty-first century pressures as the rest of the world” as a concern she has about Scotland’s sovereignty. “It must compete in the same global markets, defend itself from the same threats and navigate what still feels like a fragile economic recovery,” she writes. Competition in those global markets would include its neighbor, Britain, who some are predicting could become Europe’s largest economy by 2030.

Scotland would have also need its own army, a £2.3 billion investment according to SNP’s proposed budget. It would be kicked out of NATO with not much of a chance of getting back in according to former officials. And navigating the “fragile economic recovery” could include taking on all of its own debt, a near £92 billion figure.

All of these concerns would be tackled without help from the European Union, which currently boasts the world’s largest economy. Scottish independence would mean immediate withdrawal from the E.U. and its re-admittance would need to garner unanimous approval from all 28 member states. As long as the UK remains a part of that mix, renewed E.U. status for Scotland would be seemingly impossible.

Scotland joins other independence movements across Europe still vested in a future with the E.U. if their campaigns are successful. In Spain, Catalonia is holding its own independence referendum in November, a move unrecognized by the Spanish government who has vowed to block Catalonia from rejoining the union. The Veneto region of Italy including Venice’s picturesque canals and Shakespearean Verona held on unofficial online referendum in late March. Over 2.3 million of its registered voters participated and a whopping 89 percent favored independence from Italy. Veneto’s independence would be a striking blow to the EU as Italy is one of its founding member states and would reflect a new Europe increasingly skeptic of its role.

One of those critics happens to be the United Kingdom, who recently voted a Eurosceptic majority to the European Parliament and may hold its own referendum to withdraw from the E.U. as early as 2017. Scotland’s chances of rejoining the E.U. fare better if the U.K. withdraws, but even then the process, for both countries, would take years to complete.

“Whatever the outcome of the referendum on 18th September, it will be a historic moment for Scotland,” Rowling wrote. “I just hope with all my heart that we never have cause to look back and feel that we made a historically bad mistake.”

Shannon Greenwood is an intern at ThinkProgress.