PHRASAL VERB OF THE DAY : CATCH UP

Market for men’s fashion grown by 18% in past five years and is worth £12.9bn, which is welcome news before London shows 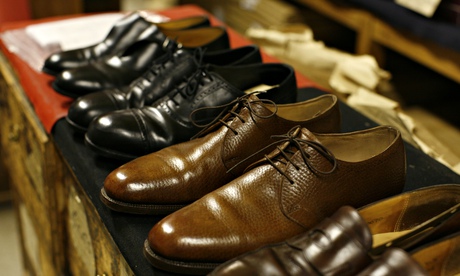 The menswear figures will be broadly welcomed by those convening in the capital for London Collections: Men. Photograph: David Levene

It has long been considered the poor relation of the fashion industry, but menswear sales are rapidly catching up with womenswear, according to research published today.

On the eve of the menswear London catwalk shows, market research firm Mintel suggests the UK market for men’s fashion has grown by 18% in the past five years and is now worth £12.9bn. That figure to reach £16.4bn by 2018.

Mintel’s findings suggest that menswear is now becoming a serious rival to the traditionally dominant womenswear market. The chief executive of the British Fashion Council, Caroline Rush, said: “The UK menswear industry is growing at an unprecedented speed. It is a serious business, a force to be reckoned with, and it has a huge impact on the economy and jobs in the UK.”

The figures will be broadly welcomed by the thousands of editors, buyers and designers convening in the capital for London Collections: Men, which kicks off for its fifth season on Sunday. More than 130 designers will participate in fashion shows, presentations, parties and networking events, with this year’s event looking likely to be highest profile yet.

Highlights include an opening ball hosted by actor Samuel L Jackson, in aid of cancer charity One For The Boys, while the footwear company Jimmy Choo will host its first ever catwalk show on Monday. Its campaign star, Game of Thrones actor Kit Harington, is expected to attend. The Burberry show, on Tuesday, is likely to deliver the event’s most celebrity-packed crowd, with regular front-row attendees for the brand including One Direction’s Harry Styles and musician Tinie Tempah.

The arrival of two big commercial brands for the first time this year – DKNYand Moschino – will further shine a light on London. The Moschino event is the first menswear collection from freshly-installed creative director Jeremy Scott. Scott’s womenswear debut in February was a brash spectacle inspired by McDonald’s uniforms.

The cutting-edge design talent that London is famous for nurturing will also be represented. There will be particular excitement surrounding Christopher Shannon’s Sunday afternoon show. This week, the Liverpudlian designer won the inaugural British Fashion Council/GQ Menswear Fund, a £200,000 prize that aims to help a flourishing designer become a global brand.

For their part, fashion editors and buyers will be on the hunt for that elusive spark of creative genius that will translate into a desirable sell-out piece next season. According to fashion forecasting agency Editd, the current trends most likely to continue to boom next year include experimental textures, such as embossing and embroidery, and floral prints.

Other items Editd forecasts to continue to sell well include backpacks and biker jackets. Though trends tend to move more slowly in menswear than in the women’s counterpart, the Mintel research suggests that wearing clothes that feel current is an increasingly important factor for younger British men. More than a quarter (26%) of those aged 25-34 admitted they are driven by the latest fashion when buying clothes, compared with 17% of women in the same age bracket.

The head of menswear at matchesfashion.com, Damien Paul, said sportswear-influenced clothing will continue to be a key focus. “The sportswear-inspired aesthetic has certainly been at the heart of contemporary menswear for the past few seasons, spearheaded by London designers like Richard Nicoll and Christopher Kane,” he said. “Bomber jackets, printed sweatshirts and trainers continue to be key categories for us. It’s part of a general loosening up in menswear – away from the dandified, buttoned-up look towards something more relaxed.”

GQ’s associate editor, Robert Johnston, believes the boom has been a long time coming: “It’s bizarre that the men’s market has been seen as such a poor relation compared to the women’s. This is just a correction.”

Johnston credits the shift, in part, to the explosion in popularity of men’s accessories and a reconnection with the bespoke tailoring, as well as a general uplift in men’s interest in their wardrobes and willingness to spend more on well-crafted pieces.

Though there have been many rumblings about the rise of men’s style before – particularly during the 1990s, when the term metrosexual gained traction – current trends suggest something more substantial. Johnston said: “Metrosexuality was more to do with an attitude. Now that attitude has turned into hard cash.”