PHRASAL VERB OF THE DAY: LIVE OFF “EIVISSA DIU NO!”

Meaning: to depend on something for the money

Example: environmentalists living off the grid on solar power,

The waters surrounding the Balearic party island are a world heritage site – and conservationists, politicians and tourist chiefs are adamant that plans to drill in the sea must be stopped 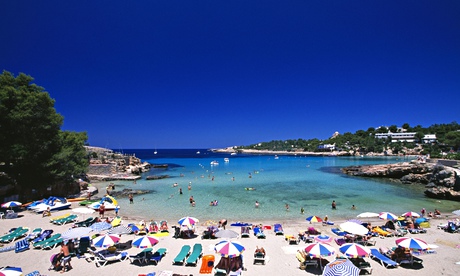 It is best known for all-night clubbing with top DJs such as Pete Tong and Fatboy Slim, an A-list celebrity crowd and partying, but Ibiza is also home to two national parks, environmentalists living off the grid on solar power, and is considered of such ecological and cultural importance that the UN designated the Balearic island and its surrounding waters a world heritage site.

Now people with interests in both camps are uniting over the prospect of oilexploration several miles off the coast in the glittering Mediterranean waters, which are home to oceanic Posidonia, a giant seagrass only found in Europe. Whales, dolphins and turtles are among the species spotted in the Mediterranean around Ibiza.

Last week in Ibiza Town’s port, a crowd of people were vying not to get into the latest upmarket club but for a tour of the Rainbow Warrior. The Greenpeaceship arrived at the island on Wednesday to rally opposition, under a banner reading, simply: “No oil”.

Scottish oil explorer Cairn Energy, whose plans to look for oil in the Arctic have made it the target of green campaigners in the past , says that although it holds licences to explore for oil in the Gulf of Valencia, to the north-west of Ibiza, any seismic testing or the drilling of test wells is a long way off. The company is awaiting a decision on its environmental impact assessment by Spanish authorities due in late summer, which will determine whether it can continue. The government says Spain imports more than 99% of its oil and gas, at great expense, and that it must ensure energy security.

Ida Kreisman, a jewellery maker at a market in Ibiza Town, on oil in Spain fromAdam Vaughan on Vimeo.

In February, more than 10,000 people marched through Ibiza Town, and around 60,000 signed a petition against oil exploration in the region. Twenty people posed naked covered in mock oil for a piece of performance art. The battle went online, with a social media blitz by celebrities who regularly visit Ibiza, including singers Dannii Minogue and Sophie Ellis-Bextor.

“I’m against it, completely. Yes, it’s selfish to say ‘we are against it’ and then use cars and phones, and not be against it in Africa or elsewhere. But this is our territory. I can’t fight for Africa so I have to fight here. We don’t really need oil,” says resident Ida Kreisman, who runs a jewellery stall.

Rebecca Gil, working for the summer at a clothes shop in Ibiza Town, says she recognises Spain‘s need for economic growth but exploring for oil is not the right approach. “I understand the argument for it, but it’s not the solution. The promise of money from the oil is a big lie.”

A straw poll of waiters, taxi drivers, hotel workers and street entertainers found all apparently opposed to the prospect. “They are crazy. It is a beautiful island. This is a paradise,” says busker Juan Sanchez, standing in the shadows of the great medieval walls surrounding the hilltop cathedral.

Even local politicians have been surprised at the degree of unanimity. “It is the first time people speak with one voice against a project like this. I cannot remember another time. This is the beginning of something,” says Vicent Serra, president of the island’s local government, the Consell of Ibiza. Serra is a member of the Popular Party, which is in power in Madrid and has argued in favour of exploring for oil, but he says he will put Ibiza first. “I am against oil prospecting here. I was voted to represent the people here.”

Jaume Ferrer, his counterpart in Formentara, an 82-square mile island off the coast, is equally unequivocal. “We feel threatened, attacked, because tourism is the main part of our economy. The tourism is based on our conservation of the environment. We say no.”

José Romone-Bauza, the president of the Balearics – Ibiza, Mallorca and Menorca – told thousands of protesters earlier this year: “Our oil is tourism.”

The sentiment is echoed by Joan Tur, president of Pimeef, a federation of 1,700 small and medium-sized businesses on Ibiza. “90% of the economy here is tourism. The island is a jewel. We have pristine water and clean sand, we are careful about our environment. We cannot take the risk to have an incident. Even the fact of having an oil platform [nearby] would mean the island had less value,” he says.

The island’s natural worth is evident when travelling around the coastline. The Posidonia, a flowering plant commonly known as Neptune grass, creates a five-mile underwater meadow to the south of Ibiza. Conservationists say it provides an important place for fish to breed, and serves an ecological function by cleaning the water.

“Cairn is looking at exploring for oil at depths of 1,000-1,500 metres, which would mean its platform had the same characteristics of Deepwater [Horizon, the source of the 2010 BP oil spill]. If there was a spill, it would be the ‘Balearic problem’ because of the currents,” says Pilar Marcus, a campaigner for Greenpeace, speaking aboard one of the group’s fast inflatable boats as two activists in the water held up placards reading, “No prospecting.”