Lampman wrote more than 300 poems in this last period of his life, although scarcely half of these were published prior to his death. For single poems or groups of poems he found outlets in the literary magazines of the day: in Canada, chiefly the Week; in the United States, Scribner’s Magazine, the Youth’s Companion, the Independent, the Atlantic Monthly, and Harper’s Magazine. In 1888, with the help of a legacy left to his wife, he published Among the millet and other poems. In 1895, after many delays and difficulties with a number of publishers, Copeland and Day of Boston published Lyrics of earth (it actually appeared the following spring). A third volume, Alcyone, and other poems, in press at the time of his death, was held back by Scott

“Placid” is another matter. Lampman’s spirit, from the end of his university days, had become increasingly troubled, beset by what he called a “morbid sensitivity.” Ironically, poetry was both a main source of his suffering and its therapy. Before he had left Toronto for Ottawa, he had written to a friend: “Good or ill – poetry is to some men like the magnetic sea mountain in the Arabian Nights, that drew the very nails out of the ships to their distraction. This same delusion will doubtless ruin me, unfitting me for any solid profession, and yet in the end fulfilling none of the vapoury hopes I have founded upon it.” Lampman was certainly not “ruined” by poetry, yet what he had said in his letter was to become a kind of self-fulfilling prophecy. By the end of the 1880s he was in full command of the type of short nature poem on which his reputation was ultimately to rest. Always, however, he had wanted to do something on a grander scale, poems with “more human life” in them, as he put it, and now, urged on by his friend Thomson, he laboured over a series of long dramatic narratives, some of them drafts from earlier days, based on ancient tales and biblical lore. They did not work; Lampman knew, as his critics were to know later, that there was not a spark of life in them. By 1893 he was thoroughly depressed. “There is one kind of work I can do,” he wrote Thomson, “nature work, as they call it and I had better confine myself to that.” The long delay in finding a publisher for Lyrics of earth increased his sense of failure. Meanwhile, his private life was disturbed by a “personal drama” only recently disclosed in its particulars: for some time he had been having an affair (if that is the word) with a fellow-worker at the Post Office, Katherine Waddell, whom he had met in 1889, and it was becoming clear that they must break the connection. In the face of all these trials one is inclined to say, as Scott said on occasion, “Poor Archie!” Critics were later to draw parallels between Lampman’s afflictions and the afflictions of Keats. But Lampman, though often hard up, was never poor; nor was he ever reviled by the critics. He had friends in reasonably high places, and he was well served by the incomparable loyalty of Scott and Thomson. 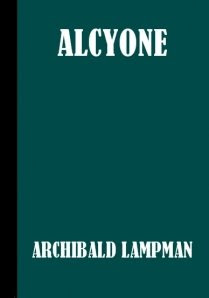 Although he despised, and lampooned in his letters, the intellectual environment of Ottawa (“I am suffocated. If I had the genius of Milton, I could do nothing.”), it must be remembered that, besides Scott, the environment included John George Bourinot*, Campbell, William Dawson Le Sueur*, Ritchie, and like men of culture and learning, all of them known to the poet. Lampman’s Angst was nevertheless real enough to him. With talents to match his zeal, he is the first Canadian poet (Isabella Valancy Crawford* might have an equal claim) to whom nothing really matters but the world of the poetic imagination, and to the extent that this is so he reflects the problems that arose in the latter part of the 19th century when a hobby became an obsession. The effect on Lampman was to make him push the world, which he had always held at arm’s length, still farther away. His retreat was to nature and the poetry nature engendered. Mercifully, in the year before he died he was tranquil. He was working on one of the finest of his nature poems, “Winter uplands,” in his last days.

Lampman achieved excellence in only a relatively small body of poems, perhaps one-third of his total output. Take these away and the residue, which would have to include the long narratives such as “The story of an affinity” and “David and Abigail,” and many of his aphoristic and quasi-philosophical poems such as “Strife and freedom” and “Good speech,” would scarcely qualify him for serious biographical attention. The literary influences that shaped his consciousness at the outset were those to be expected from the offshoot of a literate and solidly anglophile family of the time: Shelley, Wordsworth, Keats, Coleridge, Tennyson, and Arnold, to a lesser extent Byron, Browning, and Swinburne. Of these, Keats and Arnold were the most important: Keats for the restraint and intensity of his imagery (“Keats has always had such a fascination for me and so permeated my whole mental outfit that I have an idea that he has found a sort of faint reincarnation in me.”), and Arnold for his lofty idealism and moral tone. But in the end it was the core of poems he fashioned in his own way that counted. Like Antaeus, Lampman found his source of strength when his feet touched the ground. He made nature his boon companion; he observed, he felt, he recorded. The effect is that of looking through a small window at a piece of landscape carefully ordered and exact in detail. Claude Thomas Bissell has aptly called it “picturesque realism.” This description, however, is too simple. The observed detail, if we include access through sound as much as sight, is certainly there: when the wind comes, the “glimmering leaves” of the poplar “beat / Together like innumerable small hands”; into “the pale depth of the noon” on a heat-soaked day “A wandering thrush slides leisurely / His thin revolving tune”; the “dry cicada” becomes “that crazy fiddler of the hot mid-year”; as the poet walks in a winter forest “A branch cracks

now and then, and its soft load / Drifts by me in a thin prismatic shower”; lying in a field of timothy at harvest time he hears “the crackling rustle of the pitch-forked hay”; on a river, canoeing, he watches seven ducks break from the water and “With a swivelling whistle go.” But these honed and crafted images, and there are many of them, would not be enough; taken by themselves they would constitute only, as Arnold observed of the flashy Spasmodic School of poetry in the mid century, “a shower of glittering images.” In the end it is the extraordinarily organic and unified field of apprehension to which these poems attain that marks them as high art. Characteristically, to paraphrase Whitman, the poet loafs and invites his soul. The mood is dreamlike; and surely the word “dream,” or some derivative of it, is the most pervasive of all key words in the Lampman canon. Then, dreamlike becomes trancelike, and the observer, still fixed in a vantage point and quartering his field, flows by some mystic process into the very essences of the picture observed. The symbiosis is astonishingly complete. Seemingly effortless rhymes, deft metrics, and sure harmonies endorse the unity of the canvas.