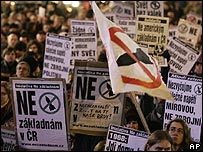 Missile Defence in Europe ? what are we talking about and what would be the impact on European security. The current negotiations of the US with Poland and Czech Republic to establish so called missile defence bases on their territories to protect western countries, bases and troops from missiles loaded with nuclear, chemical or biological warheads, launched by Iran and other rogue states, causes a lot of concern in political and other environments. (segueix…)

This overview aims to explain what is at stake and what ? from a non-militarist conflict prevention an human security perspective ? are the most urgent questions of concern. The first part of this paper explains the current missile defence approaches of both the US and the NATO. The second part provides a long list of critical concerns about both of these approaches. These missile defence projects are very likely to cause instability, insecurity, arms races, militarization of space, and social and terrorist backlash.

Once again the United States administration is unilaterally luring some member states of the European Union and the NATO, as well as the NATO itself as a whole, into a first class hegemonic militarist adventure. Poland and Czech Republic are selected because their governments are extremely pro-US and are not faced with vocal and efficient anti-militarist citizens movements as there are in other EU member states. Under the pretext of defence, the most modern technologies and enormous amounts of scarce public finances will be used to build up a very offensive system of missiles to counter a highly imaginary threat coming from rogue state Iran. Iran might develop somewhere in the future its own nuclear arsenal to match the other nuclear weapon states in the world and in its own region. But it is extremely improbable that in the first half of this century it will be able to deploy any type of missile that can reach greater parts of NATO territory (and never the US), even if it wanted do do so which is not proven at all.

The US project is clearly aimed to support ? with the US military having the monopoly to decide upon action – the campaigns of allied troops and bases all around Iraq, in particular if it would come to high scale warfare with that country.

The project is also aimed to protect the state of Israel. Last but not least the US project is also aimed to push up the parallel missile defence projects in the NATO which are of a far modest character to protect NATO-troops on action in external missions against attacks with shorter range missiles and rockets. Those in NATO who are working hard to promote the alliance as a global military force to safeguard western security-interests will positively appreciate the current evolution.

The companies involved ? which are all leading American and European military aerospace and electronic giants, are lobbying professionally to secure their parts of the contracts to be allocated. For them, confronted with European public finances not to be easily prioritised for military purposes in a time-period where taxpayers face other challenges such as climate change and social developments, the US initiative is very welcome. These same companies are leading in the technology of satellites and very soon discussions will start how to integrate Galileo ? so far pretended to be ?for civil purposes only? – and other European space-activities in the architecture of the future missile defence system as the NATO and the US see this. And even if by common effort the US/European missile defence system would become operational and effective ? which from a technological perspective cannot be excluded ? it would not deter any other nations to try to build up their own counter-deterrence against the threat as they will see it. Already Russia ? despite told not feel targeted by the new system – has announced that the current US plans will cause changes in its national missile strategy. China?s reaction to the missile defence system is not reassuring. Moreover all terrorist actors ? state or non-state ? will actively be stimulated to seek and find other and cheaper ways to deliver their weapons of mass destruction on western capitals by road, sea or air. So to any missile defence strategy, a deepgoing strategy of homeland security will have to be added to protect borders, capitals and critical infrastructure.

For the EU which is developing carefully its own approach of military and non military interventions in the framework of the European Security Strategy and the European Strategy against Weapons of Mass Destruction, the fact that both Poland and Czech Republic are easily giving in to the US demands, is extremely harmful to the global credibility of its common security and defence policy which is propagated to serve the interests of the global community at large in accordance with the UN Charter. Instead of stating that Europe is ?not concerned? as Javier Solana is doing, the EU should do better to take a totally negative stance on the US initiative.

The fact that leading EU states, such as France, Italy, Spain are remarkably silent on the issue and that in Germany the coalition seems to be split over the issue (with the Christendemocrats in favour if the US proposals will be worked out in harmony with the NATO), might be caused by the fact that behind the scenes these countries (and their corporate sector) are working on plans to establish their own national missile defence projects. And last but not least: why are parliaments not be given the opportunity to discuss all this before the decisins seem to be taken? Why are citizens all over Europe not be given the possibility to express their own will on such an important matter of life and death? Are our governments afraid that it might be true that referenda would confirm the results of opinion polls in all states, including Poland and Czech Republic, that the citizens of their countries are in large majorities against the missile defence system?