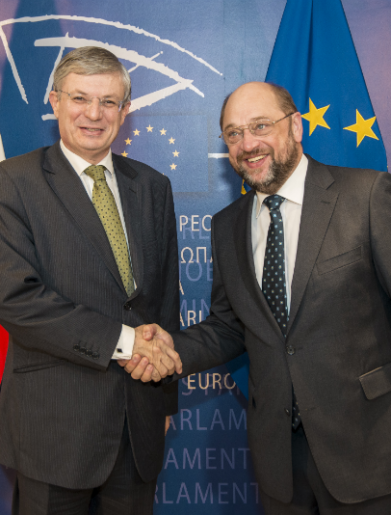 The Intergroup on LGBT rights had made clear its concerns regarding Mr Borg’s track record, notably on women’s and LGBT rights.

After the 3-hour hearing, Presidents of the LGBT Intergroup reacted personally:

Sirpa Pietikäinen MEP (EPP), Vice-chair of the Committee on Environment, Public Health and Food Safety: “Fundamental rights are not a matter of subsidiarity, they are universal. None of them are to be neglected or considered outside the competence of the EU, and I hope Mr Borg will abide by his unreserved commitment to these universal rights.”

Michael Cashman MEP (S&D): “I do remain concerned about Tonio Borg’s track record. But given the reassurances he has given us on fundamental rights, I believe we could entrust him with the public health portfolio, and hold him strictly to account on the commitments he made tonight. He said his door would ‘always be open’, so we should immediately work on issues such as blood donation for gay men, the depathologisation of transgender people, and sexual and reproductive health rights.”

Update: On the day following the hearing, Michael Cashman said in a statement: “I have given this a lot of thought, and given the doubts expressed to me by many—and especially by women who feel strongly about his negative track record on sexual and reproductive health rights— I’ve come to the conclusion that I cannot endorse Tonio Borg for the European Commission […]”

Sophie in ‘t Veld MEP (ALDE): “He gets a clear ‘no’ from me. Tonio Borg said he won’t abandon his views, and I’m very much opposed to them—his Europe isn’t my Europe. The Parliament cannot ask the Commission to press ahead with better fundamental rights, and then vet a Commissioner with very different views.”

Ulrike Lunacek and Raül Romeva MEPs (Greens/EFA): “Even though Mr Borg brandished subsidiarity and the treaties when asked about his personal views, we don’t trust him to go beyond the strict minimum and actually defend the Charter of Fundamental Rights, rather than simply abide by it. The Commission must not only respect minimum standards; it must set these standards—and set them high. We do not trust him to work for all EU citizens regardless of their gender and of their sexual orientation.”

Dennis de Jong MEP (GUE/NGL), Member of the Committee on Internal Market and Consumer Protection: “Mr Borg appeared to be competent, but he fell short of expectations when he refused to endorse the horizontal anti-discrimination Directive, which the Commission proposed in 2008, and which all Commissioners stand by. Avoiding concrete answers on legal proposals is a very negative sign.”