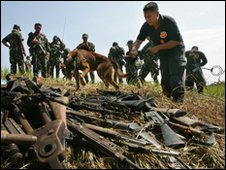 MOTION FOR A RESOLUTION with request for inclusion in the agenda for the debate on cases of breaches of human rights, democracy and the rule of law pursuant to Rule 122 of the Rules of Procedure on the Philippines

European Parliament resolution on the Philippines

–           having regard to the Declaration by the EU Presidency of 25th November 2009 on the killings in the Maguindanao, Philippines and to the statement of Philip Alston, UN Special Rapporteur on extrajudicial killings, of 2nd December 2009,

–           having regard to the UN Covenant on Civil and Political rights and the Additional Protocol thereto to which the Philippines are signatory,

–           having regard to the Financing Agreement for the EU-Philippines Justice Support Programme intended to speed up judicial proceedings against the perpetrators of extrajudicial killings, signed in October 2009,

–           having regard to the upcoming Presidential, legislative and local elections that will be held in the Philippines on Monday, May 10, 2010

–           having regard to its previous resolutions on the Philippines,

B. whereas the virtual impunity of the perpetrators and the government’s inability to effectively tackle the politically motivated violence in the country makes it very difficult to bring those responsible to justice, despite the government’s commitments during its Universal Periodic Review in 2008,

C. Whereas hundreds of thousands of people remain internally displaced by the conflict opposing the Government and the Moro Islamic Liberation Front, due to military clashes between the Armed Forces of the Philippines and the NPA, which remains active throughout the country, and by military operations against criminal groups such as the ASG in the island Provinces of Sulu and Basilan in Western Mindanao,

D. Whereas on 23 November 100 armed men of a local militia led by the Amapatuan family, including officials of the local police force, tortured and brutally murdered 57 members of a convoy of female relatives of Esmail Mangudadatu, accompanied by about 30 journalists as well as lawyers, who were on their way to file Mangudadatu’s candidacy for governorship of Magindanao province in Mindanao,

E. Whereas this massacre, representing the biggest death toll of journalists ever in one incident anywhere in the world, revealed in a shocking way to what extent local warlords, the corruption of the security forces and apparent impunity for the most ruthless crimes have taken hold of the Philippines,

F. Whereas the initial inquiry into the incident showed all the marks of the dysfunctional legal system, with late arrival of security forces at the sight, delayed investigations, inadequate crime scene analysis, and unwillingness to interview suspected military and police personnel, as well as intimidation of witnesses and the prosecution which resulted in the resignation of the first assigned judge on 16 December,

G. Whereas on 24 November the government declared a state of emergency in the two provinces concerned, thus putting the military in charge of law and order, invited international forensic experts to support the inquiry  and on 4 December went even as far as to declare martial law in Maguindanao for one week, the first such decision since 1972,

H. Whereas this move let to the arrest of the leading members of the Ampatuan family, the discovery a staggering arsenal of weapons and thousands of hidden voter identification cards hinting towards massive vote rigging in favour of  President Arroyo’s political party Lakas-Kampi-CMD,

I. whereas the elections in the Philippines have in the past been marred by frequent extrajudicial executions of political opponents committed by private armies and militias employed by politically influential families and whereas there is every indication that an increase in killings of political activists will take place in the run-up to the May 2010 elections,

J. whereas the brutal killings in Maguindanao constitute a major setback for peace and democracy in the Philippines and puts in jeopardy the peace talks between the Philippine government and the Moro Islamic Liberation Front which resumed on 8 December in Kuala Lumpur, facilitated by the Malaysian government,

1. Strongly condemns the brutal killing on 23 November of 57 civilians including some 30 journalists and members of a local politician’s family preparing to participate in the electoral process in the southern province of Maguindanao;

2. Welcomes the eventual response of the Philippine government to the massacre and stresses that the police investigation must be comprehensive and independent and that it must be followed by effective prosecutions of all those responsible for the murders;

3. Calls on the responsible authorities in the Philippines to do their utmost to identify the perpetrators including members of the security forces and bring them to justice without delay; further requests that the government ensures an urgent protection of witnesses;

5. Requests the government’s decisive action in order to immediately stop all private and local funding of police and military auxiliaries and to disband paramilitary forces and local militias; to this aim calls on President Arroyo to revoke Executive Order 546;

6. Welcomes in this respect the gun ban recently issued by the Commission on Elections in preparation for the 10 May polls,

7. Is deeply concerned that the administration’s personal links with the Ampatuan family could hinder rather than help in an impartial investigation into the killings and requests that the Amaptuan family be questioned by the National Bureau of Investigation;

8. Expresses its concern that the declaration of the state of emergency by the President combined with giving greater powers to the armed forces that in the past were implicated in numerous extrajudicial killings will not prevent or mitigate election violence in the Mindanao province;

9. Calls on the government to increase efforts to eliminate instances of political violence in order to assure the future of the democracy in the Philippines; calls in particular on the authorities to establish a high-level task force with broad political support in order to urgently put into place measures to prevent election-related violence in the months ahead of the May elections and to take steps designed to protect the media and the freedom of expression in general;

10. Welcomes the European Commission’s support programme EP JUST to strengthen the Philippine criminal justice system including awareness raising for basic Human Rights principles among the security services, and support for the Commission on Human Rights and civil society;

11.Instructs its President to forward this resolution to the Council, the Commission, the President and Government of the Philippines, the United Nations High Commissioner for Human Rights and the governments of the ASEAN Member States.