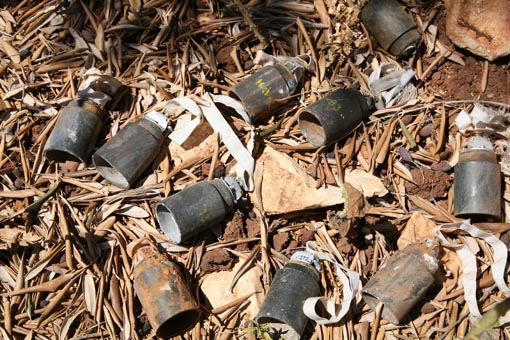 1. Urges all EU Member States to sign and ratify the Convention on Cluster Munitions (CCM) as a matter of urgency before 1 August 2010, including the non signatory states Estonia, Finland, Greece, Latvia, Poland, Romania, Slovakia and the states that have signed but not yet ratified as Bulgaria, Cyprus, Czech Republic, Hungary, Italy, Lithuania, the Netherlands, Portugal, and Sweden; mindful that the CCM enters into force on 1 August 2010 states and after this date states will need to accede to the Convention in a one step process;

2. Urges all EU member states that have signed the Convention on Cluster Munitions to take every opportunity to encourage States not party to the CCM to sign and ratify or accede to the Convention as soon as possible, including through bilateral meetings, military-to-military dialogue and multilateral fora, as they are obligated to under Article 21 of the Convention;

3. Calls on the EU Member States not to take any action that might circumvent or jeopardise the CCM and its provisions; in particular, calls on all EU Member States not to adopt, endorse or subsequently consent to be bound by a possible Convention on Conventional Weapons (CCW) protocol allowing for the use of cluster munitions which would not be compatible with the prohibition of such munitions pursuant to Articles 1 and 2 of the CCM; calls on the Council and EU Members States to act respectively at the next CCW meeting on 30 August – 3 September 2010 in Geneva;

4. Urges EU Member States that are not yet party to this Convention to take interim steps pending adherence, including to adopt a moratorium on the use, production and transfer of cluster munitions and to start the destruction of cluster munitions stockpiles as a matter of urgency;

5. Urges all states to participate in the upcoming First Meeting of States Parties (1MSP) that will take place on 8 November – 12 November 2010 in Vientiane, Laos, the most heavily cluster munitions contaminated country in the world;

6. Urges EU member states to take steps to begin to implement the Convention including by destroying stockpiles, undertaking clearance and providing victim assistance, and contribute to funding or different forms of assistance to other states to undertake implementation of the Convention;

7. Urges EU Member States that have signed the Convention to pass legislation to implement it at a national level;

8. Calls on the High Representative of the Union for Foreign Affairs and Security Policy to make all efforts in order to realize the accession of the Union to the CCM which is possible after the entry into force of the Lisbon Treaty;

9. Calls on the High Representative of the Union for Foreign Affairs and Security Policy to make all efforts in order to develop a strategy for the first review conference in the form of a Council Decision on a Common Position;

10. Calls on Council and Commission to include the ban on cluster munitions as a standard clause in agreements with third countries in addition to the standard clause on non-proliferation of weapons of mass destruction;

11. Calls on Council and Commission to introduce the fight against cluster munitions into Community assistance programmes in order to support third countries in destruction of stockpiles and humanitarian assistance;

12. Urges EU Member States to be transparent about their efforts undertaken under this resolution and to report on their activities publicly;