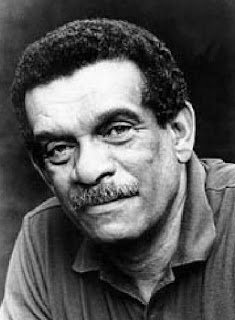 DEREK WALCOTT was born in St. Lucia, British West Indies, in 1930. He lived there till he went to the University of the West Indies, the Jamaica campus, in 1950. After graduating, he went to Trinidad, wh ere he worked with the Trinidad Theater Wor kshop, writing plays anddirecting them. In the past few years he has spent more, if not most,of his time in the United States writing and teaching.

He has had at least two lives. One of them, acknowledging his white English grandfather, has kept in touch with the Empire, the classics, English literature, but also the insignia of Greece and Rome. The other has stayed in the streets of Port of Spain, speaking the patois, Creole. It would be wrong to say that his first life has issued in poems, his second in plays, but the error is venial, because the plays are Walcott’s effort to give his people what they have lacked or forgotten, a sense of themselves in historical and dramatic terms. His poems have been more intimate meditations, crossing into public issues only by necessity and rarely for long.

Walcott has published more than twenty plays. The majority of these plays have been produced by the Trinidad Theatre Workshop, and have also been widely staged elsewhere. Many of them deal, either directly or indirectly, with the liminal status of the West Indies in the postcolonial period. Epistemological, ontological, eco 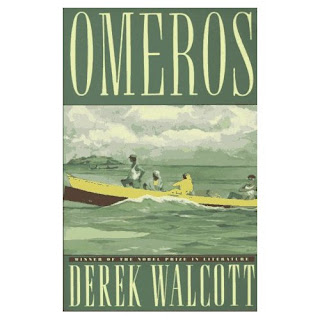 In his 1970 essay on art (and specifically theatre) in his native region, What the Twilight Says: An Overture, Walcott bemoans the lasting effects of over 400 years of colonial rule. He reflects on the West Indies as colonized space, and the problems presented by a region with little in the way of truly indigenous forms, and with little national or nationalist identity. Walcott shifts his poetic language between formal English and patois to highlight the linguistic dexterity of the Caribbean people. While recognising the profound psychological and material wrongs of the colonial project, Walcott simultaneously celebrates the hybridisation of Antillean cultures. His epic po 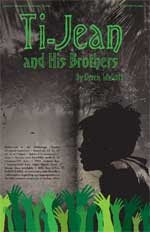 em Omeros exposes the complex cultural strains that converge in his native St. Lucia, celebrating at once the European, Amerindian, and African heritage shared by the islanders.

Discussions of epistemological effects of colonization inform plays such as Ti-Jean and his Brothers and Patomime. One of the eponymous brothers in Ti-Jean and his Brothers (Mi-Jean) is shown to have much information, but to truly know nothing. Every line Mi-Jean recites is rote knowledge gained from the coloniser, and as such is unable to be synthesized and thus is inapplicable to his existence as colonised person.

Walcott probes the colonial dialectic in his two-hander Pantomime. In the play, Walcott revisions the story of Robinson Crusoe / Man Friday in an effort to destabilize the colonial power constructs. Reversing the roles of master / servant, Walcott temporarily lends to Trinidadian Jackson, a guest house factotum and calypso singer, the role of Crusoe, with Harry, a British ex-patriate and owner, the identity of “Thursday,” thus resetting Daniel Defoe’s legend in pre-colonial days. Recalling his fascination with the Edenic concept on naming, Walcott highlights the problem 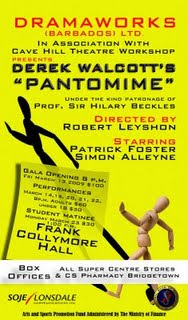 that faces the Caribbean writer by having Jackson re-appropriate the material objects around him, re-christening them in a pseudo-African language, calling the table “patamba,” the chair “banda,” etc, recalling the poesía negra’s use of jitanjáfora mentioned earlier. The scene at first reflects Jackson’s agency: he has the ability to resurrect the language of his ancestors and regain ownership of the material of his island, teaching his minion Harry, the Anglo Thursday, his new tongue and establishing authority over his surroundings. Jackson’s inability to resurrect a dead language reflects the Caribbean’s lack of a single, discernable cultural history; Harry’s retort reveals the violence inherent in the linguistic indoctrination of the colonial powers: language through the barrel of a gun. Walcott writes in English, the language of Trinidad, but he also makes full use of the local dialects, or what Barbadian writer Edward Kamau Brathwaite calls “nation language,” and portrays Jackson as code-switching throughout the play to reveal his culture’s linguistic dexterity.

Walcott’s plays weave together a variety of forms; including those of the folktale, morality play, allegory, fable, ritual and myth; as well as using emblematic and mythological characters to address issues in non-realistic ways.