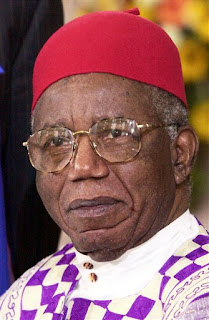 Chinua Achebe (born November 16, 1930) is a Nigerian novelist, poet, and literary critic. A diplomat in the ill-fated Biafran government of 1967-1970, Achebe is primarily interested in African politics, depictions of Africa and Africans in the West, pre-colonial African culture, and the effects of colonialism on African societies.

Achebe’s 1958 novel Things Fall Apart, which explores colonialism and Igbo society, is the most widely-read book in modern African literature, translated into over 50 languages. He generated controversy and praise in 1975 for his classic critical text on Joseph Conrad, and his 2000 essay collection Home and Exile reiterated his long-standing belief that Africa and Africans were being unfairly marginalized by European and Western-oriented intellectuals.

It is a 1959 English-language novel, a staple book in schools throughout Africa and widely read and studied in English-speaking countries around the world. It is seen as the archetypal modern African novel in English, and one of the first African novels written in English to receive global critical acclaim. The title of the novel comes from William Butler Yeats’ poem, “The Second Coming.”

The novel concerns the life of Okonkwo, a leader and local wrestling champion throughout the nine villages of the Ibo ethnic group of Umuofia in Nigeria, his three wives, his children (mainly concerning his oldest son Nwoye and his favorite daughter Ezinma), and the influences of British colonialism and Christian missionaries on his traditional Igbo (archaically spelled “Ibo”) community during an unspecified time in the late 1800s or early 1900s.

Things Fall Apart is a milestone in African literature. It has achieved the status of the archetypal modern African novel in English, is read in Nigeria and the rest of Africa where it is a staple in schools; it is read and studied widely in Europe and North America where hundreds of articles and scores of major studies have been written about it; in India and Australia it is probably the most famous African novel. 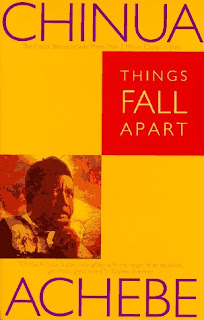 It annually sells more than a million copies and is considered Achebe’s magnum opus.

It was followed by a sequel, No Longer at Ease (1960), originally written as the second part of a larger work together with Things Fall Apart, and Arrow of God (1964), on a similar subject. In addition, Achebe states that his two later novels, A Man of the People (1966) and Anthills of the Savannah (1987), while not featuring Okonkwo’s descendants and indeed set in completely fictional African countries, are spiritual successors to the previous novels in chronicling African history.

Things Fall Apart is written in third-person omniscient; the reader experiences the novel through an outside narrator. This way, the reader is able to not only see all that is happening, but the thoughts and motives of different characters as well. This allows dramatic irony to occur. The perspective of the novel was appropriate because of the language barrier; Achebe has peppered pieces of the Igbo language throughout the book (with an appropriate glossary for the terms at the back of the novel in some editions) proving that it is too complex for a complete English translation. By having a third-person narrator, it allows the reader to understand what is going on at all times. Things Fall Apart has relatively limited dialogue, because the language is so different from English; in order to understand the whole plot the reader must know what the characters are thinking and their motives.