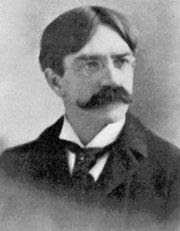 A Canadian poet and prose writer. Besides his own body of work, Roberts is known as the “Father of Canadian Poetry” because he served as an inspiration for other writers of his time. Roberts, his cousin Bliss Carman, Archibald Lampman and Duncan Campbell Scott were known as the “Confederation poets”.

Together, these four poets became known as the “Confederation” poets.

His two best collections of verse, In Divers Tones and Songs of the Common Day and Ave! An Ode for the Shelley Centenary . In this latter work, Roberts recreated Maritime life with vivid sensitivity.

His most successful prose genre was the animal story, in which he drew upon his early experience in the wilds of the Maritimes. Along with Ernest Thompson Seton, Roberts is credited with inventing the modern animal story. He published over a dozen such stories between Earth’s Enigmas and Eyes of the Wilderness.

Roberts’s “tales of animals are symbolic…not with the artificial symbolism of ‘Aesop’s Fables’…, but by revealing in the simple truth of animal life a universal meaning. The symbol is not invented; the thing is found to be symbolic”.

Earth’s Enigmas participates in two of the discourses that shaped Canadian almost as much as American writing in the eighteen eighties and nineties:

<!–[if !supportLists]–>(1) <!–[endif]–>the discourse of anti-modernity that valorized pre-and undercivilized spaces as realms of emotional and spiritual intensity anterior or adjacent to the materialistic and artificial world of the modern city;

<!–[if !supportLists]–>(2) <!–[endif]–>and (2) the related discourse of therapeutics that encouraged writers to produce books set in such spaces that would medicine the minds and nervous systems of the victims of modernity.

During the pre-Confederation period, Canada’s popularity as a destination for tourists seeking picturesque and sublime scenery grew as a result of various literary and transportational factors.

“The Tantramar Revisited” is Charles G.D. Roberts’ poetic masterpiece and is divided into five stanzas of irregular length, each containing variations on what has variously been seen as the hexameter or the elegiac metre. In view of the great metrical variation in the poem and of the fact that the elegiac metre itself consists of alternate hexameter and pentameter lines, it seems both prudent and felicitious to say simply that in “The Tantramar Revisited” Roberts first opens with and then plays against a hexameter norm.

When commenting on the verse form of “The Tantramar Revisited” most critics cite the hexameters of Longfellow’s Evangeline as Roberts’ precedent and model, usually ramarking that the poem is derivative and reminiscent without being original or innovative. Longfellow was one of the poets whose work inspired the Canadian writer “in his earliest days with the love of poetry” . He described Longfellow as “the greatest of New England’s poets” and Evangeline as an instance of the way in which the Maritime Provinces and the New England States had “acted and reacted upon one another. . . .”

While Roberts did not invent a new form for his poem, his decision to remember and to echo in “The Tantramar Revisited” the verse form, the cadences, and even specific details of Evangeline is both apt and appropriate, not only because his poem takes as its theme “nostalgic remembrance,” but also because it takes as its subject a portion of the landscape of the Maritimes, and indeed precisely that portion which Cappon appositely calls “the land of Evangeline.” The suggestion, then, is that the verse form of “The Tantramar Revisited” is more than mere “masterly” handling of the form that Longfellow had made his own Evangeline; it is a suitably allusive use of the hexameter by means of which the Canadian poet echoes the American poem and, in so doing, adds historical depth and resonance to his meditation on the effects of time and memory in the region of the Tantramar marshes on the Bay of Fundy. “The Tantramar Revisited” thus gains an historical dimension (and it is worth remembering here Roberts’ well-known fascination with the history of the Maritimes) through an allusion inherent in its verse form and its cadences.

The verse form of “The Tantramar Revisited” is interesting for reasons other than its allusiveness. Remark upon the facility and skill with which Roberts handles his metre. By setting up the expectation of a hexameter rhythm and then playing against it the rhythms dictated by the verbal sense and the reading voice, or, to be more specific, by establishing a hexameter norm at the beginning of the poem (the first line has a full sixteen syllables) and then proceeding to modify it with more natural rhythms, (few lines in the body of the poem have more than thirteen syllables). Roberts serves the reader’s ear notice of what, in effect, is the imaginative adventure of the poem: the speaker’s discovery of the disjunction between his expectation and the reality, between his expectation that the marshlands have not been affected by Time and the reality that, of course, they have. Put somewhat crudely, the suggestion is that, just as the classical metre, which as a classics metre might seem immune to the forces of “change” is, the reader discovers, far from immune to change in “The Tantramar Revisited,” so the speaker of the poem comes to realize that even in the landscape of his youth the same forces are at work.