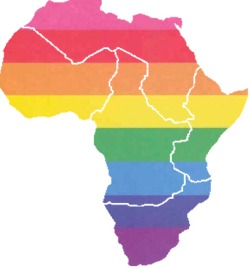 Yes. All human beings are born free and equal in dignity and rights. And all states have the obligation to prevent violence and incitement to hatred based on sexual orientation, gender identity and gender expression, and to respect the principles of equality between women and men;

However, the stigmatisation of and violence against lesbian, bisexual, transgender and intersex women, as well as against women perceived as, by state and police forces, by the women’s families, and by community members, is far from disappearing in many countries.

Today we concentrate in the situation of women in Africa, where female homosexuality is legal in 27 countries and illegal in other 27.

Thus, I am glad this Parliament strongly condemns (see resolution below) all forms of violence and discrimination against lesbians in African countries where this is taking place, including extreme forms of violence, such as ‘corrective’ rapes, and other forms of sexual violence;

And that expresses its strong support for campaigns and initiatives aimed at abolishing all discriminatory laws against women and LGBTI persons.

Please, note the PPE has finally declined to adhere to the common text.

JOINT MOTION FOR A RESOLUTION
pursuant to Rules 122(5) and 110(4), of the Rules of Procedurereplacing the motions

on violence against lesbian women and the rights of lesbian, gay, bisexual, transgender and intersex (LGBTI) persons in Africa (2012/2701(RSP))
A.   whereas all human beings are born free and equal in dignity and rights; whereas all states have the obligation to prevent violence and incitement to hatred based on sexual orientation, gender identity and gender expression, and to respect the principles of equality between women and men;

B.   whereas the rights of lesbian, bisexual, transgender and intersex women are the same human rights as those of all women and all men, which must be protected regardless of their sexual orientation, gender identity or gender expression;

C.   whereas some African countries (…)

have been at the forefront of action to uphold human rights and fundamental freedoms, whereas South Africa’s post-apartheid constitution was the first in the world to outlaw discrimination based on sexual orientation and whereas South Africa was the initiator of UN Human Rights Council resolution 17/19 on human rights, sexual orientation and gender identity;

D.   whereas there are political movements and leaders that will be able to lead the way to changes and to the strengthening of human rights, women’s rights and the rights of lesbian, gay, bisexual, transgender and intersex (LGBTI) persons in Africa;

E.   whereas there is increasing stigmatisation of and violence against lesbian, bisexual, transgender and intersex women, as well as against women perceived as lesbian, bisexual, transgender or intersex, by state and police forces, by the women’s families, and by community members in Africa, which is a shared concern, as exemplified by the numerous statements by UN Secretary-General Ban Ki Moon and UN High Commissioner for Human Rights Navanethem Pillay and by UNHRC Resolution 17/19 of 17 June 2011 on human rights, sexual orientation and gender identity;

G.   whereas women who transgress social and cultural norms are liable to be labelled lesbian and risk becoming a target for male violent behaviour and/or degrading treatment, and whereas this has the effect of repressing the expression of all women’s sexuality and freedom of choice, including that of heterosexual women; whereas sexual rights are related to the bodily autonomy and freedom of choice of all women;

I.    whereas laws that criminalise same-sex relationships and sexuality contribute to creating a climate which encourages violence against women who are, or are perceived to be, lesbians;

J.    whereas killings, torture, imprisonment, violence, stigmatisation and hate speech targeting LGBTI people, sometimes legitimised by law, are reported in all regions of the world; whereas there have been repeated acts of violence and aggression against lesbians in several African countries;

K.   whereas the struggle for equality and justice and for the visibility and rights of lesbians is closely connected with the overall struggle for women’s human rights; whereas lesbians are also, like many other women, subjected to violence, both for being women and on account of their sexual orientation;

L.   whereas in Cameroon, ten women were arrested, and three charged for the first time, for practising homosexuality in February 2012; whereas arrests and beatings by the police are ongoing, with the latest recorded instance on 24 June 2012; whereas lawyer Alice Nkom has on numerous occasions been threatened with death and violence for defending people accused of homosexuality; whereas an LGBTI meeting in Yaoundé was violently broken up by a gang on 19 May 2012;

M.   whereas the Liberian Senate is currently debating a proposal to extend further the ban on same-sex relationships foreseen by current law; whereas the media and general public are increasingly seeking to intimidate LGBTI people; whereas two lesbian women in Liberia were recently attacked by armed men;

N.   whereas in Malawi, female homosexuality was newly outlawed in January 2011; whereas the new President Joyce Banda has stated that she will ask the parliament to repeal laws criminalising homosexuality;

O.   whereas in Nigeria, the ‘Same-Sex Marriage Prohibition Bill’ seeks to criminalise  the registration, operation and sustenance of certain organisations and their meetings or processions, and outlaws activities that fall strictly within the bounds of private life; whereas discussions of this Bill have contributed to increased tensions and threats against LGBTI people;

P.   whereas in South Africa, so-called ‘corrective’ rapes of lesbian and transgender women continue unabated; whereas ongoing debates about the constitutional protection of persons victimised because of their sexual orientation are fuelling violence against LGBTI people; whereas gay activist Thapelo Makutle was recently tortured and killed, 22-year-old lesbian Phumeza Nkolonzi was shot in the head because of her sexual orientation, and Neil Daniels was stabbed, mutilated, and burnt alive because he was gay;

Q.   whereas in Swaziland, positive efforts are being made to prevent and cure HIV/AIDS in populations at risk, including women, and men who have sex with men, the country’s criminalisation of homosexuality notwithstanding;

R.   whereas in Uganda, in February and June 2012, police forces and the Minister for Ethics and Integrity, acting without warrants and in disregard of citizens’ freedom of assembly, stopped private meetings of human rights activists; whereas the Minister plans to outlaw 38 organisations understood to work for the human rights of LGBTI people; whereas the Anti-Homosexuality Bill first proposed in 2009 is still under discussion, and may include unacceptable provisions including the death penalty; whereas lawsuits and enquiries in Uganda and in the United States have revealed the role of, among others, Scott Lively and the Abiding Truth Ministries, a fundamentalist US-based evangelical group, in spreading hate and intolerance on the basis of sexual orientation, and in having the law introduced;

Discrimination and violence against lesbian women in Africa

1.   Strongly condemns all forms of violence and discrimination against lesbians in African countries where this is taking place, including extreme forms of violence, such as ‘corrective’ rapes, and other forms of sexual violence;

3.   Confirms that the struggle for the fundamental and human rights of lesbians in Africa is closely linked to the protection of the sexual and reproductive rights and health of all women; calls, therefore, on the European Union, in its work with partner countries in Africa, to make a firm commitment in terms of resources and policy in support of sexual and reproductive health and rights;

4.   Calls on the relevant authorities in Africa to effectively protect all women from murder, so?called ‘corrective’ rape and other sexual violence, and to bring the perpetrators to justice;

5.   Notes that the stigmatisation of ,and the violence directed against, lesbian, bisexual, transgender and intersex women are often closely connected with discrimination;

6.   Expresses its solidarity with, and support for, all actors that mobilise for a stronger women’s rights agenda;

7.   Calls on the European Commission and the Member States to support women’s organisations and LGBTI organisations in Africa in their struggle for the equality, bodily autonomy and right to freedom in sexuality of all women and LGBTI persons; highlights, at the same time, the need to give special attention to lesbians within the LGBTI and the women’s movement, as well as in other social movements, in order to denounce the double or sometimes multiple discrimination faced by lesbians in African countries;

8.   Calls on the European Commission, the European External Action Service and the Member States to step up the implementation of the goals set out in the EU Plan of Action for Gender Equality and Women’s Empowerment in Development, and to pay particular attention to the rights of lesbian, bisexual, transgender and intersex women, both in their relations with third countries and when lending support to non-governmental organisations and human rights defenders;

10. Denounces incitement to hatred and violence on grounds of sexual orientation, gender identity or gender expression; calls on the aforementioned countries to effectively uphold LGBTI people’s right to life and dignity, and condemn all acts of violence, discrimination, stigmatisation and humiliation directed against them;

11. Calls on political and religious leaders to condemn persecution and discrimination based on sexual orientation and to take a firm stance against homophobia, hereby joining Archbishop Desmond Tutu’s call against injustice and prejudice and for solidarity and justice;

12. Calls on the EEAS, the European Commission and the Member States, in their political dialogue with African countries, to remind them of their obligation to fulfil the commitments assumed under legally binding international human rights instruments and conventions, and in particular to respect and promote the right to non-discrimination based on sexual orientation and gender identity;

13. Welcomes the fact that some African countries, including Cape Verde, the Central African Republic, Gabon, Guinea-Bissau, Malawi, Mauritius, Rwanda, São Tomé and Principe, South Africa and Swaziland have made known their opposition to the criminalisation of homosexuality, have ensured access to healthcare for LGBTI people or have pledged to decriminalise homosexuality;

14. Calls on the ACP Group of States to engage in an open, constructive and mutually respectful discussion;

15. Calls on the African countries to ensure security for LGBTI human rights defenders, and calls on the EU to assist local civil society with capacity-building programmes in Africa;

16. Insists that trade agreements and development programmes include non-negotiable human rights and non-discrimination clauses, particularly under the Development Cooperation Instrument and the Cotonou Agreement, and that they must be in conformity with the new human rights-based approach to EU development policies, not least as regards action to combat  discrimination based on gender and sexual orientation;

17. Urges the European Commission, the EEAS and the Member States to make full use of the LGBT Toolkit to encourage third countries to decriminalise homosexuality, help reduce violence and discrimination and protect LGBTI human rights defenders;

18. Calls on the European Commission to continue funding non-governmental organisations working to protect the rights of LGBTI people, notably through the EIDHR;

19. Recalls the Member States’ obligation, under Directive 2004/83/EC (recast), to protect or grant asylum to third-country nationals escaping or risking persecution in their country of origin on the basis of their sexual orientation and gender identity;

20. Calls on the Commission, and notably on Catherine Ashton, High Representative of the Union for Foreign Affairs and Security Policy and Vice-President of the European Commission, to take concrete action, by mobilising all appropriate instruments, to exert pressure in order to protect people from discrimination and persecution on the basis of their sexual orientation, and to raise these issues in the course of the EU’s relations and dialogues with third countries; calls on the Commission to include these issues in the roadmap against homophobia which the European Parliament has on several occasions called on it to draft[1];

21. Instructs its President to forward this resolution to the Council, the Commission, the High Representative / Vice-President for Foreign Affairs and Security Policy, the Member States, the Secretary-General of the ACP Group of States, all Ambassadors of ACP states to the European Union, the South African Parliament, and the African Union and its institutions.