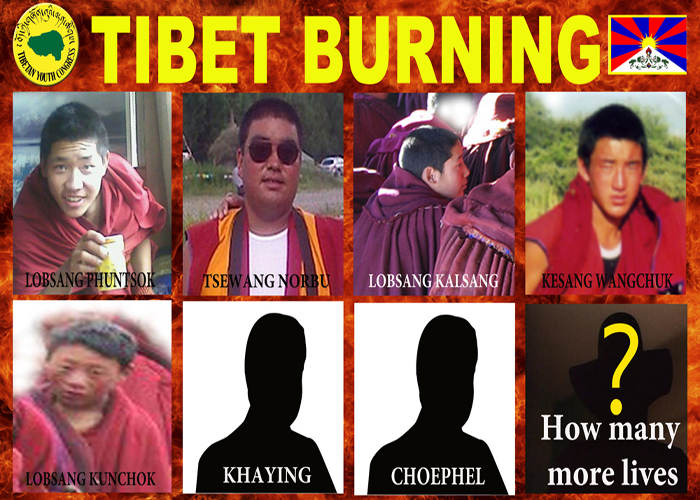 MOTION FOR A RESOLUTION on Tibet, in particular the self-immolation by nuns and monks

–  having regard to its previous resolutions on China and Tibet, in particular its resolution of 25 November 2010,

– having regard to article 36 of the Constitution of the PRC, which guarantees all citizens the right to freedom of religious belief,

A. whereas the respect of the human rights and freedom of identity, culture and religion is a founding principle of the EU and a priority of its foreign policy,

B. whereas the Chinese government has imposed drastic restrictions on Tibetan Buddhist monasteries in the Aba prefecture of Sichuan province and other parts of the Tibetan plateau including brutal security raids, arbitrary detention of monks, increased surveillance within monasteries and a permanent police presence inside the monasteries to monitor religious activities,

C. whereas these security measures are designed to curtail the right to free expression, association and religious belief in Tibetan Buddhist monasteries,

D. whereas Phuntsog, age 20, and Tsewang Norbu, 29-year old, died after setting fire to themselves, respectively on 16 March and 15 August  2011, as a protest against Chinese restrictive policies in Tibet,

E. whereas the younger brother of Phuntsog, Lobsang Kelsang and Lobsang Kunchok, both aged 18, set fire to themselves in the Ngaba County market on 26 September, whereas although they survived, their present conditions remain unclear,

G. whereas on 17 October a nun from Ngaba Mamae Dechen Choekorling Nunnery, Tenzin Wangmo, aged 20, died as the first female to commit self-immolation,

H. whereas all monks have reportedly called for religious freedom and the return of the Dalai Lama before committing self-immolation,

I. whereas in March 2011, following the first immolation incident, armed personnel surrounded the Kirty monastery and cut off its access to food and water for several days; whereas the new security officials dispatched to the monastery  imposed a new compulsory “patriotic education” campaign and more than 300 monks were taken away in military trucks and detained in unspecified locations to undergo several weeks of political indoctrination,

J. whereas security measures and harsh restrictions have exacerbated tension and self-immolation is seen as a form of protest and expression of increasing desperation of young Tibetan people, especially within the Kirti monastery’s community,

K. whereas whatever the personal motivations, these acts must be considered in the larger context of religious and political repression in Aba that can be traced back many years,

L. whereas current regulations have dramatically expended state control over religious life with many expressions of religious identity being subject to state approval and control, including the recognition of reincarnate lamas,

M. whereas over the last months the Chinese authorities have tightened security in regions with Tibetan populations, especially in the surroundings of the Kirti monastery, with journalists and foreigners being banned from visiting the region and police in full riot gear patrol the monastery,

1. Expresses its deep concern and regret at the reports, since last April, of eight Tibetan Buddhist monks and one nun self-immolating near the Ngaba Kirti monastery in China’s Sichuan province;

2. Calls on the Chinese authorities to respect the rights of Tibetans in all the provinces of China and to act in a proactive manner to resolve the underlying grievances of China’s Tibetan population;

4. Urges the Government of the People’s Republic of China to be accountable for the status of those Tibetans who have been “hospitalized” after their self-immolations, including the access to their medical treatment;

5. Calls on the High Representative of the Union for Foreign Affairs and Security Policy to take immediately action in order to express the concern of the European Union for the escalating situation in Aba county urging for human rights and fundamental freedoms and restraint of security police;

6. Calls on the European Union and its Member States to pressure the Chinese authorities into a negotiated solution of the ongoing crises in Tibetan monasteries, especially in Kirti;

7. Reiterates its call to the Council to appoint a EU Special Representative for Tibet with a view to facilitating the resumption of dialogue between the Chinese authorities and the envoys of the Dalai Lama on the definition of a genuine status of autonomy of Tibet within the People’s Republic of China;

8. Calls on the Chinese authorities to review and improve inappropriate policies that do not meet the need of the Tibetan populations, in the regions of  Sichuan, Gansu, Yunan and Qinhai, places where violations of human rights have created tensions;

9.Calls on the EU HR/VP Commission Lady Ashton to raise human rights issue at the EU-China Summit on 25 October in Tianjin , together with the President of the European Commission and of the European Council in order to clearly protect Tibet’s unique religious, cultural, and linguistic identity during their official speeches at the opening or closing of the Summit;

10.  Calls on the EEAS and the EU delegation in China to constantly monitor the human rights situation in China and to present a report to the EP within the next twelve months, suggesting actions to do or policy to implement;

11.  Urges the People’s Republic of China to respect religious freedoms and basic human rights of the monastic and lay communities in the Aba province and suspend implementation of religious control regulations, review religious and security policies implemented since 2008, and begin a transparent dialogue with the leaders of Tibetan Buddhist schools;

12.  Calls on the People’s Republic of China to withdraw military and other armed personnel surrounding Kirti monastery and hand over the entire day-to-day management of the monastery to the monks and allow unhindered atmosphere of religious activity for both the monks and the lay people;

13.  Calls on the People’s Republic of China to lift the military siege in Aba province and allow independent and neutral observers to the region;

14.  Urges the Government of the People’s Republic of China to respect internationally agreed standards on human rights and abide by its obligations to international human rights conventions with respect to freedom of religion or belief;

15.  Instructs its President to forward this resolution to the HR/VP, the Council, the Commission, the governments and parliaments of the Member states, the Government and Parliament of the People’s Republic of China.