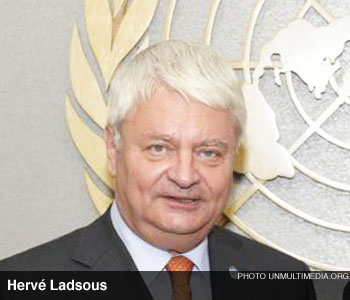 UNITED NATIONS, April 11 — In what is becoming an annual ritual of craven ineptitude, the UN Secretariat of Ban Ki-moon and Frenchman Herve Ladsous have again crudely watered down their report on Western Sahara.

Inner City Press is today putting online the versions of April 6, 2012, which had a discussion of the referendum on self-determination for which the UN mission MINURSO was set up, and the changed version of April 11, which drops the reference, and more.

The April 6 version said that MINURSO was

“intended to operate for three critical purposes: 1) as an instrument of stability in the event that the political stalemate continues; 2) as a mechanism to implement a referendum on self-determination in the event that the talks led by my Personal Envoy are successful; and 3) to provide independent information on conditions in the Territory to the Secretariat, the Security Council, and the international community.”

The revised April 11 version changes 2) to

“as a mechanism to support implementation of successive Security Council resolutions related to the mandate of MINURSO (the United Nations Mission for the Referendum in Western Sahara).”

This happened last year, though it took an actual leak to Inner City Press to expose it. This year, the UN did it openly, after having circulated the April 6 version.

While most attribute the changes to pressure from Morocco, which this year unlike last is a member of the Security Council, active not only on Western Sahara and often positively, Inner City Press would put more of the blame, or shame, on the Secretariat of Ban Ki-moon and Ladsous, the fourth Frenchman in a row to head the UN Department of Peacekeeping Operations.

Already Ladsous has been written to with this complaint:

“Dear Mr. Ladsous. I am concerned by the fact that the UNSG report whose copy has been already sent to the UNSC members and the parties (Morocco news agency MAP has already published several parts of the report) still not available on the UN web site. I learned that once again Morocco is trying to force changes on some specific paragraphs contained in the ‘recommendations and observations.’ This attempt is showing nothing more nothing less than is not only MINRSDO on the ground which is submitted to ‘unacceptable established practices’ imposed by Morocco but also the UN headquarters.”

But Ladsous and Ban Ki-moon who appointed him appear to be more and more shameless. How will they explain these changes? How will envoy Christopher Ross respond? His briefing is scheduled for April 17. And what’s called the Group of Friends on Western Sahara are, without AU input, negotiating a draft resolution, on which we’ll have more. Watch this site.