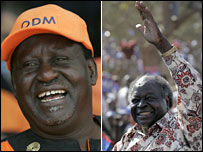 Kenya’s politicians must take the lead in bringing an end to violence. If not, they risk a terrible legacy

The situation in my country, Kenya, is shocking and dangerous. We must act to end the violence and senseless killings, which erupted after the announcement by the Electoral Commission of Kenya (ECK) that President Mwai Kibaki had won the presidential elections. It is important to understand that there has been longstanding underlying discontent and mistrust between some ethnic communities, which has been fed by generations of politicians.

The current political situation had its genesis when President Moi stepped down in 2002 and anointed Uhuru Kenyatta as his successor. Senior politicians who hoped to succeed Moi decamped from his party and joined in opposition with Kibaki, creating the National Rainbow Coalition (Narc). In December 2002, Kenyatta was defeated and Narc came to power with Kibaki as president.

In opposition, Narc’s two constituent groups had signed an agreement to share power when victory was secured. This was not honoured, and deep disappointment and discontent led to divisions. In 2005, these caused the defeat of a government-backed draft constitution. In the 2007 election, the Kibaki-led camp campaigned as the Party of National Unity, while the other camp, led by Raila Odinga, became the Orange Democratic Movement (ODM). Both were strongly backed by their ethnic communities, with deep mistrust on either side.

Before the results were announced, claims of rigging and irregularities were widespread among ODM supporters; at least one electoral commissioner also raised this charge. After Kibaki was declared the winner, the ODM claimed it had been robbed of victory, and election observers (local and international) also admitted irregularities. When Kibaki rejected ODM demands to step down, members of communities that mainly supported the party turned on those communities perceived to have voted for Kibaki. These have included the Kikuyus, Kisiis and Luhyas. Hundreds of people have been killed and thousands displaced, and properties have been burned and looted.

There is frustration among ODM supporters because they believe victory was denied them. We now have a great divide in the country that can only be resolved through truth and reconciliation. Given the admission from the ECK chairman that the election tallying process was irregular, we should have the votes recounted by an independent body, or we should rerun the elections. To expect Kenyans to accept the flawed results would be unfair and undemocratic.

An equally important step is for the two leaders to engage in dialogue. It is challenging for some to exercise restraint, but greatness is demonstrated at times like this. The country’s future depends on how the ODM leadership shapes its reactions and how the government responds. We need political maturity and respect for our laws.

Part of the way forward could also be a power-sharing arrangement, which should be constitutional and put in place by parliament. It would allow the political and economic affairs of the country to return to normality within the shortest possible time.

Even as political leaders play their role, citizens should refrain from violence. All 42 communities in Kenya are bound by geography and history to live as neighbours. Killing, destroying property and displacing our brothers and sisters creates a legacy that will haunt our children and their children.

Let us stand up for each other, irrespective of our ethnic backgrounds and political persuasions. Injustice to one is injustice to all of us. If we, individually and collectively, are not the conscience of our country, then who is?