CATALAN POLITICS IN A FEW WORDS 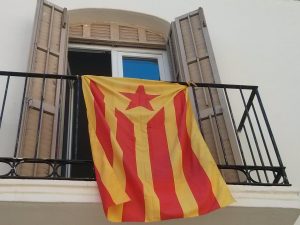 CATALAN POLITICS IN A FEW WORDS

The independence movement in Catalonia is, above all, democratic, and this takes precedence over it pro-independence leanings. In other words, it does not envisage any other way of achieving independence other than by democratic means. It is simple: democracy comes first, and independence must be a consequence of that. For the Spanish state, on the other hand, the unity of the state comes before everything else, including democracy, and, as it has shown, it is ready to impose itself with the use of violence, if necessary violating the rights established in its own constitution in order to stop and destroy any political opponent that could shake the economic, judicial and military power that remains in the hands of those who were already in power during the Franco regime. These are the same people who today prop up the monarchy established by the dictator Franco himself and who veto any investigation that might expose the corruption of these powers. A far from impartial judicial and police system has fuelled the extreme right, which is running wild with total impunity.

On 1 October 2017 the government of Catalonia called for a binding referendum where everyone could vote and answer with a ‘yes’, ‘no’ or blank vote to the question: ‘Do you want Catalonia to become an independent state in the form of a republic? ‘. The ‘yes’ vote won by 90% with a turnout of 43% despite calls for a boycott by unionist forces and violence by the Spanish police. The result has not yet been implemented even though, as of today, there is a pro-independence majority in parliament as 52% of votes were for pro-independence parties.

Many human rights institutions have denounced Spain’s abuses and violations of rights, which the state is trying to cover up by insisting that it is ‘a full democracy’. They want to convey to the international community the false idea that ‘the Catalan problem has been solved’. Is Catalan independence a problem? Or is it an opportunity for the democratisation of Spain? And is the conflict resolved? What do the Catalans think? The conflict will never be resolved if it is made to disappear by force and whilst Catalans are not allowed to decide their own way forward.

In Europe, the Spanish state is asserting its rights as a member but shirking its commitments, which ends up affecting the credibility of the EU itself and weakening it in the eyes of the international community.

In the end, to put it simply: Spain is the only EU country where fascism won the war.