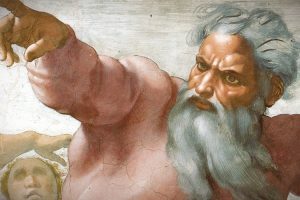 YHWH as HWHY: a Bi-gendered Deity for Jews, Christians and Muslims

“The four-Hebrew-letter name of God, which scholars refer to as the Tetragrammaton, YHWH, was probably not pronounced “Jehovah” or “Yahweh,” as some have guessed. The Israelite priests would have read the letters in reverse as Hu/Hi — in other words, the hidden name of God was Hebrew for “He/She.” Counter to everything we grew up believing, the God of Israel — the God of the three monotheistic, Abrahamic religions to which fully half the people on the planet today belong — was understood by its earliest worshipers to be a dual-gendered deity.”

You may read the complete article here: https://www.nytimes.com/2016/08/13/opinion/is-god-transgender.html?_r=3 . And I encourage everybody to do so; it’s a must read!

Of course, other religions, like Hinduism have never had any issue depicting their Gods as androgyne, bi-gender, gender-variant, genderfluid or whatever similar concept you may think of; on the contrary.

Here down I post one of the most popular representations of Shiva as Nataraja, the Lord of Dance, with traits partly feminine, partly masculine; and also a typical illustration of Lord Krishna playing the flute –and featuring an overtly androgynous look:

[Image from the Los Angeles County Museum of Art]

By contrast, the header image, by Michelangelo Buonarroti, on the ceiling of the Sistine Chapel, symbolizes very well our classical biased view of the God from The Bible as an elderly and very virile man.