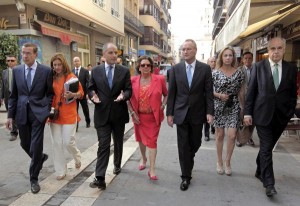 A newly-appointed prison governor in Italy has cracked down on convicted mafia mobsters wearing designer label clothes to flaunt their wealth and status.

Rita Barbera, the new governor of Ucciardone jail in Palermo, the capital of Sicily, has said the practise of prisoners wearing Gucci, Armani and other designer clothes, as well as flashy jewellery, must stop.

Unlike many countries, prisoners in Italian jails are not required to wear uniforms.

Lax conditions at the 19th century prison, where one mafia godfather is reported to have celebrated his birthday with Champagne and lobster, have earned it the nickname ‘The Grand Hotel’.

The relaxed regime prompted comparisons with the Hollywood film Goodfellas, starring Robert De Niro and Joe Pesci, whose characters lived the high life even when they were behind bars.

Mrs Barbera said she will no longer tolerate prisoners, many of them members of the Cosa Nostra mafia, showing off their status with Louis Vuitton jackets, Valentino silk shirts and adidas and Nike trainers.

“In the collective memory, this prison has been linked to images of godfathers wearing silk clothes, and this is something we need to snuff out,” the governor said. “We need to eliminate disparities between prisoners, which has been expressed through exhibitions of status, power and economic supremacy.”

But the crackdown has already sparked indignation from inmates and their families.

“Why should the authorities be allowed to dictate what my husband wears?” one woman told La Stampa newspaper.

Another complained: “My husband will have to walk around naked because he only has designer clothes, not to show off but because they’re of better quality and they last longer. Why humiliate him in this way and make me go and buy all his clothes in street markets?”

Not all prisoners enjoy such indulgent conditions. The seafront jail, a former fortress built by the Bourbon rulers of Sicily, is badly overcrowded, with 700 inmates crammed into cells which were designed to accommodate 500.

In contrast with wealthy mafiosi, who have been allowed to set themselves up in comfort, many prisoners are foreigners or common criminals who cannot even afford underwear or proper shoes, according to prison welfare groups.

Login | Register with the Telegraph

Thanks for posting. Would you like to edit your profile?

jccm
Yesterday 11:00 PM
Recommended by
2 people
Jesus !!!!! Economic crisis in Spain is even worst than expected!!!!!!  Rita is at the same time Mayor in Valencia and a prison governor in Italy. Central European Bank must definetively do something right now.

(Another exclusive, Josep Guardiola is the brand new Pope and Rafael Nadal is a new member of Coldplay)

Pedro Manuel
Yesterday 10:58 PM
I´ve never laughed so much. This article and specially the photo is outstanding. Is it today Fool´s Day’
Report Recommend

radeberger
Yesterday 07:43 PM
Recommended by
5 people
I think it is a good idea to verify the information before publishing it. Rita Barbera is the major of Valencia (Spain) since 1991. http://www.valencia.es/ayuntam…
I don’t think she will change her actual job for being governor of any jail
Report Recommend

pietrosl
Yesterday 04:38 PM
Recommended by
5 people
This is stupid. There will now be a row about what constitutes “designer.” If Italy are serious about this they need to but them all uniforms which would probably have a more salutary effect than being able to supply your own clothes in any case. Then make them all eat the same food – regardless of diet and make them work. I may be simple but it seems to me that the more pleasant prisons are the less likely the prisoners are to feel that they are being punished.
Report Recommend

andyscouse
Yesterday 01:51 PM
Recommended by
7 people
One Italian mob ‘lady’ (I can’t say the word that starts with ‘b’ and ends in ‘int’) complains: “My husband will have to walk around naked because he only has designer clothes, not to show off but because they’re of better quality and they last longer. Why humiliate him in this way and make me go and buy all his clothes in street markets?”

Well, you dozy cow, we should humiliate him because he’s a CRIMINAL.  Are you thick?  It was his choice.  Let him wear pov clothes for once.  Or else have him walk around naked (maybe castrate him first).

glum
Yesterday 12:43 PM
Recommended by
5 people
Isn’t it about time that where criminals have profited from their crimes that the punishment should fit them? I suspect (but this is only supposition…..) that such designer clothes came from the profits of their criminal activities. Wouldn’t it be fitting that all wealth was stripped from them and their family – not just a custodial sentence as punishment? And yes, prison uniforms, the only standard currency available in the prisons. It’s not supposed to be Maplins! (whoops they wore uniforms though!)
Report Recommend

andyscouse
Yesterday 01:48 PM
Recommended by
4 people
Yes it is.

Mob people are morons, plain and simple.  Unfortunately, rich morons.  However, all their ill-gotten gains should be sequestrated, and they should be made to walk around in traditional prisoner garb.

I don’t understand when people hold these scumbags in “awe” … oooo, I’m soooo scared of them.  Hmmm.  Well, at least for these ones that got caught, make them suffer …. and kudos to this woman for making a start.

hazey
Today 12:05 AM
For the most part they are a bunch of cretins but, if you live in a southern Italian community dominated by crime families and you go up against them or refuse to play and pay along – they will have you killed or worse. You won’t know when or where, then you’re gone. Don’t expect the police or politicians to lift a finger, they know who’s boss. That’s still the widespread reality
Report Recommend

superenalotto
Yesterday 11:57 AM
Recommended by
7 people
“prisoners in Italian jails are not required to wear uniforms.”
lol why not?
Report Recommend

hazey
Yesterday 11:54 PM
It would be way too much for the Italian system to organise – It would require endless rounds of debate, consultation, referrals, audits, applying for EU subsidies, negotiating terms, then the whole process of tendering for contracts…  All the documentation in elaborate detail, signed in triplicate, stamped, filed, interminable back room wrangling and shady deals, pay-offs, guarantees of confidentiality. Eventualy the uniforms would have to be designed by Armani or D&G – just to satisfy national pride and they’d end up being manufactured in some Calabrian sweat shop run by, guess who..
Report Recommend