PHRASAL VERB OF THE DAY: “JOIN UP”

To join up: Meaning: to work together to achieve something

JOINING UP Ghana’s healthcare to save lives 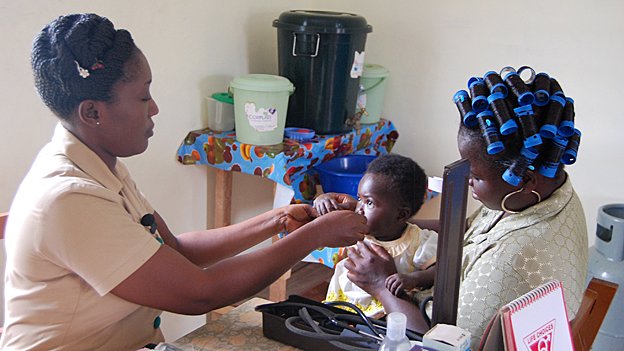 Giving birth in Sub-Saharan Africa is a risky business.

It kills more mothers and babies than anywhere else in the world, according to the World Health Organisation (WHO).

On the veranda of the small, squat bungalow that is the Ahentia Community Based Planning and Service (CHPs) clinic sits a group of women. Some are pregnant, some nursing babies, they are waiting patiently to see the community health officer. 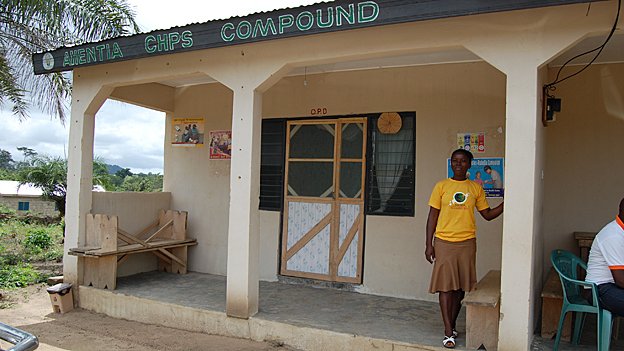 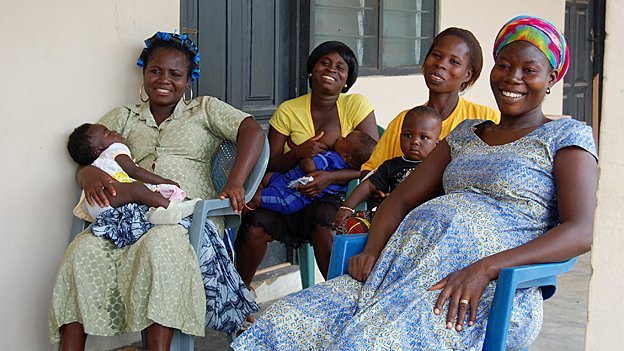 Waiting for their appointments, Alice Hanson (left), Sophia Pabie, Joycelyn Yawson and Cynthia Larbie catch up on the gossip

What makes this situation a little different is that each of them has been reminded about their appointment by messages sent to a mobile phone, through a system called Mobile Midwife.

They also receive regular messages with individually-tailored information on everything from eating properly to when to give up manual labour to important treatment and vaccination advice.

Cynthia Larbie is pregnant with her second child.

Alice Grant-Yamoah explains how Mobile Midwife has changed her work

“When I was pregnant for the first time I would have enemas, which are supposed to be good for you and the baby. But listening to messages from Mobile Midwife, I learnt they can cause your baby to be aborted,” she says.

“The reminders really help, too. Because I wasn’t sure when my first baby would arrive, I gave birth at home, but this time being told that I’m close to delivery means that I’m prepared and ready to give birth at the clinic.” 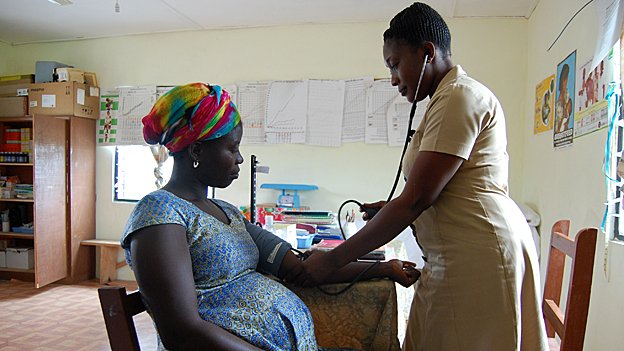 Convincing women to come for regular antenatal appointments has been difficult

“Most of the mothers are illiterate, so when we wrote the date [down], they forgot about it,” she says.

“[Mobile midwife] saves mothers’ lives. Because in this community we believe … superstitions. For example you go and meet a mother at home, telling [her] to come for antenatal care.

“[They say] If I come the evil eye will look at me and I will lose my baby. That’s what I did with my previous babies and I lost the babies.”

Mobile midwife is part of the Ghana mobile technology for community health (Motech Ghana) initiative – a collaboration between the non-profit organisation Grameen Foundation and the Ghana Health Service. 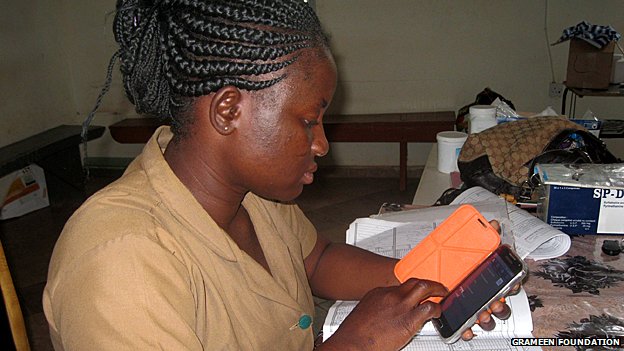 In a country where there are more active mobile phone lines than people (although using several Sim cards is common, so this doesn’t mean that everyone has a mobile phone), using the technology to reach women and connect healthcare facilities makes sense.

When a woman signs up for the service, she is assigned a unique number.

After each appointment, the nurse updates her medical records electronically using a mobile phone. By reviewing a digitally-generated monthly report, she can see who has had the correct vaccinations, for example. It also means that the health service can gather centralised data on maternal health in the region.

The platform is now used in seven districts across Ghana. A desk-top nurse application has been developed to make it easier to enter large amounts of data, as well as an app for android smartphones. 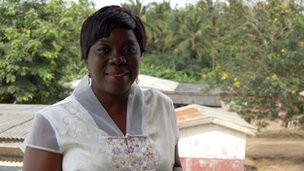 Patricia Antwi: “We’ve seen an increase in antenatal care coverage as compared to the years when we didn’t have the Mobile Midwife service”

“We’ve also seen an increase in immunisation coverage, because the messages are around from pregnancy to the start of life. We’ve seen an increase in the number of mothers coming to the facility to deliver. And also we’ve seen that many more of the mothers are very knowledgeable about health issues,” says Patricia Antwi, district director of health services for Awutu-Senya district.

Challenges remain, however – in rural areas network coverage can be patchy, and communities are often off the national grid, with no way to charge a mobile. And mobile phone ownership is lowest amongst poor, rural women, according to Eddie Ademozoya, Grameen’s head of implementation for the Motech Platform.

“Mobile literacy has [also] been an issue in a developing country like this,” he says.

“We have piloted a system of equipping Mobile Midwife agents with a solar charging device so that they can charge the mobile phones of women in the communities for a fee. It’s designed in the form of a business-in-a-box.” 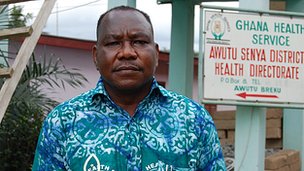 For the Grameen Foundation, the time has come to hand over the running of the platform in Ghana to the Ghana Health Service. But that doesn’t mean that their involvement is over.

“We’ve re-engineered [the Motech platform] to make it more robust, to make it scale, so it can serve the whole nation instead of just districts,” says Grameen’s director of technology innovation David Hutchful.

The suite is now being offered as an open source download, and is being used elsewhere in Africa, Asia and South America not only for maternal health but as an HIV medication reminder service and for general health management among other things.