PHRASAL VERB OF THE DAY : HIPPOS TAKE OVER COLOMBIA?

To take over:
Meaning : to take control of something
USE: completion (thoroughness) 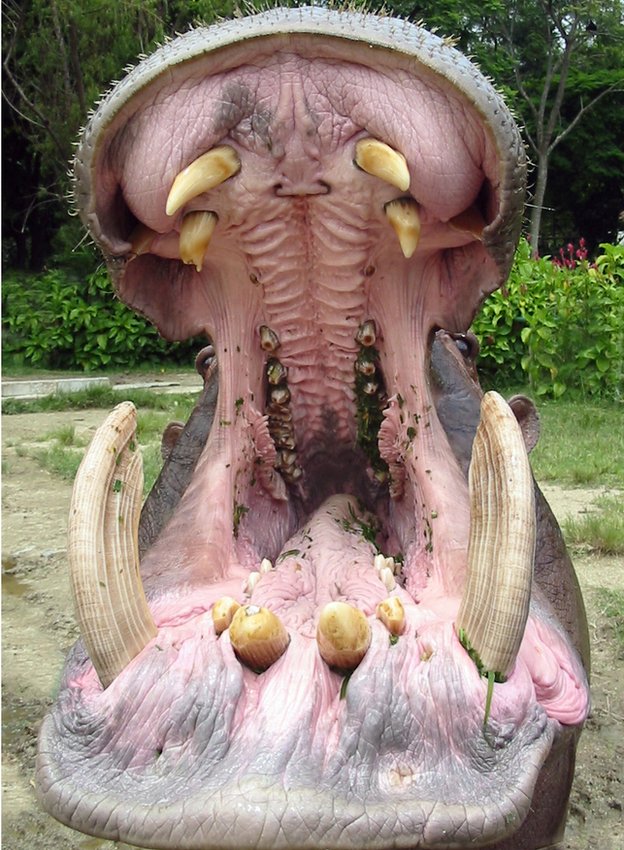 A herd of hippopotamuses once owned by the late Colombian drug baron Pablo Escobar HAVE BEEN TAKING OVER the countryside near his former ranch – and no-one quite knows what to do with them.

It was in 2007, 14 years after Escobar’s death, that people in rural Antioquia, 200 miles north-west of Bogota, began phoning the Ministry of Environment to report sightings of a peculiar animal.

“They found a creature in a river that they had never seen before, with small ears and a really big mouth,” recalls Carlos Valderrama, from the charity Webconserva.

He went to look, and found himself faced with the task of explaining to startled villagers that this was an animal from Africa. A hippopotamus.

“The fishermen, they were all saying, ‘How come there’s a hippo here?'” he recalls. “We started asking around and of course they were all coming from Hacienda Napoles. Everything happened because of the whim of a villain.”

Situated halfway between the city of Medellin and Bogota, the Colombian capital, Hacienda Napoles was the vast ranch owned by the drugs baron Pablo Escobar. In the early 1980s, after Escobar had become rich but before he had started the campaign of assassinations and bombings that was to almost tear Colombia apart, he built himself a zoo.

He smuggled in elephants, giraffes and other exotic animals, among them four hippos – three females and one male. And with a typically grand gesture, he allowed the public to wander freely around the zoo. Buses filled with schoolchildren passed under a replica of the propeller plane that carried Escobar’s first US-bound shipments of cocaine.

While Don Pablo masterminded the operations of the Medellin Cartel from his villa on the hill, the locals gazed at the strange animals and even stranger concrete dinosaurs that Escobar built for his son. 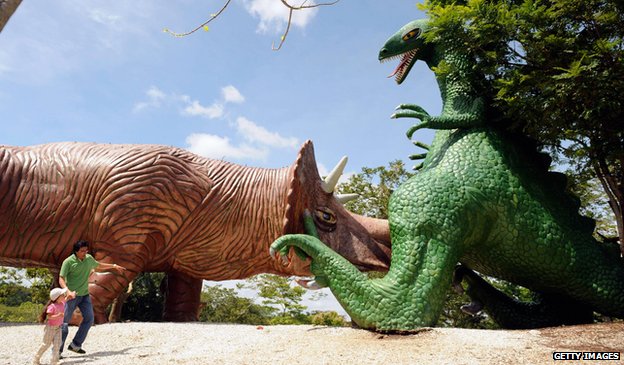 When Hacienda Napoles was confiscated in the early 1990s, Escobar’s menagerie was dispersed to zoos around the country. But not the hippos. For about two decades, they have wallowed in their soupy lake, watching the 20sq km (8 sq mile) park around them become neglected and overgrown – and then transformed back into a zoo and theme park, complete with water slides. All the while, the hippos themselves thrived, and multiplied.

There are people saying, ‘Oh why do you have to castrate them? Just let them be – castrate the politicians’”

Nobody knows how many there are. The local environmental authority, which bears responsibility for them, estimates between 50 and 60, with most living in the lake at the park. But 12 are known to have paddled past the flimsy fence and into the nearby Magdalena River – and maybe many more.

Here, conditions for hippos are idyllic. The river is slow moving and has plenty of shallows, perfect for larger animals which don’t actually swim but push themselves off banks, gliding through the water. Moreover, the region never experiences drought, which tends to act as a natural brake on the size of herds in Africa.

How much the hippos like Colombia can be judged from how much sex they are having. In Africa they usually become sexually active between the ages of seven and nine for males, and nine and 11 for females, but Pablo Escobar’s hippos are becoming sexually active as young as three. All the fertile females are reported to be giving birth to a calf every year. 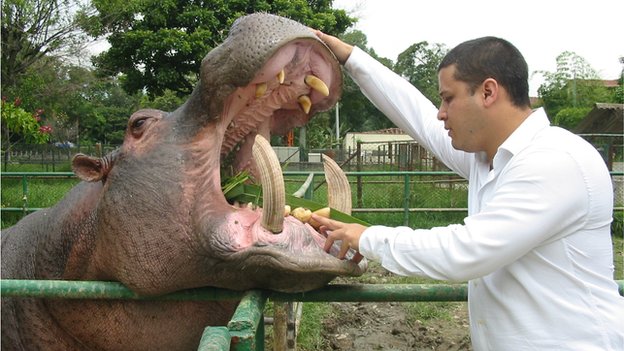 Valderrama, whose job until recently included watching over the hippos in the Magdalena, has seen animals up to 250km (155 miles) away from Hacienda Napoles. Fishermen are terrified of the three-tonne herbivores, he says. At night, the animals roam the countryside, wandering into ranches, eating crops and occasionally crushing small cows.

Colombian people, he believes, are more vulnerable than Africans because they see hippos as cuddly, “floppy” animals. The respected El Colombiano newspaper recently reported that children in a school near Hacienda Napoles are sharing a pond with the animals, and having direct contact with hippo calves at home.

“My father brought a little one home once,” an unnamed girl told the paper. “I called him Luna (Moon) because he was very sweet – we fed him with just milk.” Another child, a boy, told the paper: “My father has captured three. It is nice because you have a little animal at home. We bottle-feed them because they only drink milk. They have a very slippery skin, you pour water and they produce a kind of slime, you touch them and it’s like soap.” 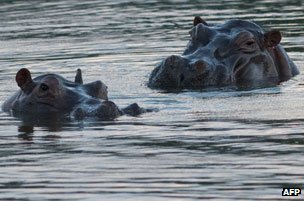 One hippo is to blame for the move upriver. Hippos live in harems. The alpha male at the Hacienda is known as El Viejo – The Old Man – and he is very powerful, gaping his massive jaws at younger males when they approach any of the females in the herd. These frustrated Lotharios have no option but to leave and try to form their own herds elsewhere. All the keepers can do is try to keep the hippos near the lake with a free dinner, made up of around 350kg of sugar cane, tall grass and vegetables.

But adult hippos are dangerous. Despite their ungainly appearance, they are very agile in the water and can charge on land at up to 18 mph (29km/h). It’s often said that hippos are responsible for more human deaths in Africa than any other animal – though it may be more accurate to say they cause more deaths than any other wild mammal.

Attacks happen when humans encroach on hippo territory, says Lewison. But the animals aren’t like crocodiles, she points out – they don’t see a thing and instinctively want to kill it – so in a sparsely populated area it may be safe to let Escobar’s hippos be. In the 30-year history of Escobar’s herd, there have been no reports of anyone being killed or even seriously injured. But living near the animals is inevitably a risk, Lewison says – one that local people have to decide whether they are willing to take.

For Carlos Valderrama, however doing nothing is not an option. “We have seen that hippos are very territorial and very aggressive,” he says. “They are not a tame animal. The risk for local populations to just leave them to browse around will be huge.”

The ideal solution would be to relocate them, he says. But it’s not easy to move a hippo, and even if the government were to kit out teams of experienced vets with trucks and helicopters, there’s nowhere to put the animals. They can’t be returned to Africa because there is a risk that they carry diseases. That leaves captivity. A handful of hippo calves have been transferred to zoos in Colombia, but there are currently no takers for the adults.

Beyond that, options are limited. 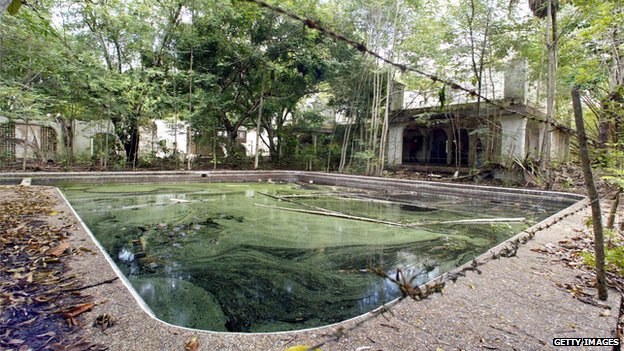 Escobar’s house and pool, photographed in 2004

Some – including those at the Hacienda Napoles park – favour containing the numbers with a programme of castration. But not only would this be costly and dangerous for the vets, it’s thought many hippos would die. “Hippos are very sensitive to chemical compounds,” explains Lewison. “It doesn’t make any sense – they’re enormous! – but they have this incredible sensitivity to sedation.”

I think they should barbecue them and eat them”

Valderrama also points out that it would be very difficult to ensure that all the males had been attended to, given that no-one knows how many there are – and it only takes one overlooked bull to do the procreation work of a whole herd.

Another idea, favoured by David Echeverri of the local environmental authority, is to build a reserve with proper hippo-proof fences. But it would be a huge challenge to round up all the feral hippos of Antioquia, and would cost an estimated $500,000 (£290,000).

“It is not going to be accepted in general by environmentalists and biologists here, because Colombia doesn’t have a lot of money,” says Patricio von Hildebrand, a biologist working in the Amazon region. “They don’t think the money should be invested in maintaining a few hippos rather than conserving the original species in Colombia.”

Hildebrand has another, more radical solution: “I think they should barbecue them and eat them.”

He isn’t joking. During experiments with electric fences a while ago, he recalls, someone misjudged the voltage and electrocuted one of the Hacienda Napoles hippos. “What did the local people do? They took him, they chopped him up, they barbecued him and they ate him!” The animal is said to have tasted similar to pork.

Valderrama doesn’t recommend eating the meat, in case it is infected with a transmittable disease – one dead hippo was found to be carrying leptospirosis which can cause meningitis – but he does see the complete elimination of male hippos as the most practical solution. 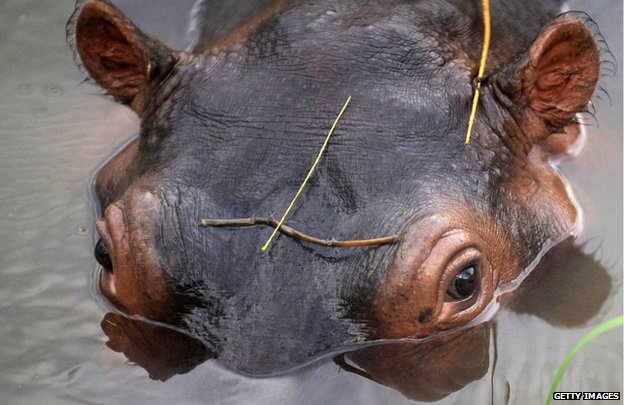 This was also the view of international experts from the World Wildlife Fund and the Disney Foundation, who visited Colombia in 2010 – they described the hippo situation as a “time bomb”. But Echeverri can see how this story would play internationally, and wants to avoid it.

“We do not want to choose the easy option and give the world this negative image, not with such a charismatic animal,” Echeverri says.

“The country is changing the image it gives the world – we don’t want to be in the headlines for such a story.”

In 2009, Colombia did make the headlines for hunting down and killing a bull hippo, Pepe, that had been deemed a public nuisance. Even though a professional hunter shot the animal, a group of soldiers had helped to corner it, and a photograph of them posing next to the body caused an outcry.

The hunt for two other hippos, a female, Matilda, and her calf, Hip, had to be called off.

Valderrama, who was astonished at the backlash, calls it “the floppy effect”. The reason why nothing has been done about the hippos, he says, is that whatever decision the government makes will be controversial. “They already castrated one, and there are people saying, ‘Oh why do you have to castrate them? Just let them be. Castrate the politicians.'”

He believes, however, that Colombians are starting to see beyond the soft side of hippos, and perceive the real risks they pose.

The mixture of feelings in some ways resembles the complex attitude Colombians had towards Pablo Escobar himself. 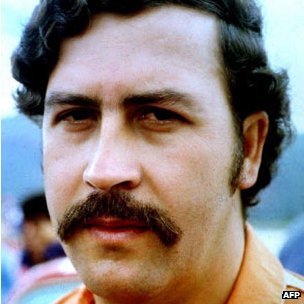