PHRASAL VERB OF THE DAY: HAND “BACK”

To hand back: meaning: to give something back to someone

USE: return (usually to point of origen) 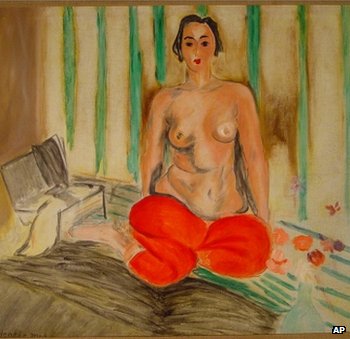 A painting by the French artist Henri Matisse, stolen more than a decade ago, has been handed back to the Venezuelan authorities by US officials.

The painting, Odalisque in Red Pants, was recovered in Miami Beach in an undercover operation two years ago.

An American and a Mexican citizen were both arrested and convicted of theft.

The painting, which used to be on display in a museum in Caracas, was replaced by a fake but the switch took years to discover.

It was exchanged for a bad copy sometime between 1999 and 2002 but it was not until 2003 that officials at the Museum of Contemporary Art in Caracas realised what had happened.

The original was found by US undercover agents in a hotel room in Miami.

“The work is in extraordinary condition, with only slight imperfections on the edges, but it is fine,” said Joel Espinoza, an official with Venezuela’s attorney general’s office.

The painting was flown back and arrived in Venezuela on Monday where it will go on public display in two weeks time.

Painted in 1925, Odalisque in Red Pants has been valued at more than $3m.

It was bought by the Venezuelan government from a gallery in New York in 1981.