PHRASAL VERB OF THE DAY: CUT OFF

Russia cuts off gas supply to Ukraine after talks collapse

Russia cuts off gas supply to Ukraine after talks collapse

Gazprom accuses Kiev of failing to pay huge debt, while Ukraine PM says row is part of Russian plan to destroy his country 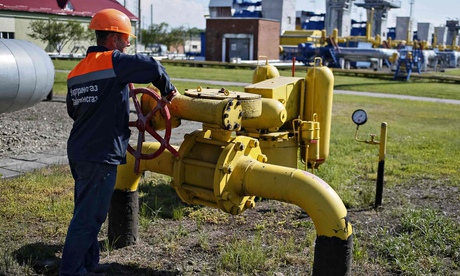 Russia turned off the gas to Ukraine on Monday, the latest hostile act in the crisis between the two countries.

Both sides blamed the other for the collapse of last-ditch talks in Kiev on Sunday evening that lasted into the early hours of Monday.

Alexei Miller, chief executive of Russia’s state gas company, Gazprom, said the Ukrainians were trying to “blackmail” Russia into giving them a lower price and had failed to pay back a huge debt accumulated over recent years. Ukraine’s prime minister, Arseniy Yatsenyuk, said the gas negotiations were part of a “general Russian plan to destroy Ukraine”.

The gas issue is one more bone of contention in the dispute between Russia and Ukraine, in which Russia has annexed the Crimea peninsula and Kiev has accused Moscow of stirring up unrest in the east of the country.

On Monday, Ukraine’s president, Petro Poroshenko, announced plans for a temporary ceasefire in the east, where fighting has killed more than 300 in the past two months, including 49 deaths when a Ukrainian transport plane carrying soldiers was shot down near Luhansk over the weekend.

Poroshenko said that prior to the ceasefire Ukrainian forces needed to regain full control of the country’s border with Russia, which in places has fallen into the hands of separatists.

The president, in office for a week, has been trying to win support for a peace plan, but details have been thin and fighting has continued.

Poroshenko has said that he would be willing to offer an amnesty for fighters who did not have “blood on their hands”, as well as early parliamentary elections and guarantees over the status of the Russian language.

It is unclear yet how separatist leaders would respond to the ceasefire offer, especially as many of them are unlikely to be spared by the amnesty.

The Ukrainian president has spoken to his Russian counterpart, Vladimir Putin, by telephone about the plans, but it is not clear whether the Kremlin has the will, or even the ability, to rein in the protest movement in the east.

Russia said it would have no further dealings with Ukraine’s foreign minister, Andriy Deshchytsia, after he was caught on camera over the weekend telling the crowds outside the Russian embassy that Putin was a “dickhead”.

When asked about the incident during a press conference in Minsk, Russia’s foreign minister, Sergei Lavrov, pointedly did not call Deshchytsia a minister, referring to him as “the person whose surname is Deshchytsia”.

“I do not have anything else to discuss with him, and I don’t plan to speak to him,” Lavrov said.

The breakdown in negotiations over gas will bring back memories of earlier gas wars, when deliveries from Russia to Europe were interrupted. At the height of summer, the immediate consequences this time are likely to be less dramatic.

The European energy commissioner, Guenther Oettinger, who took part in talks on Sunday night between Gazprom and Ukraine’s Naftogaz, said he believed the situation was “solvable” if the sides showed more flexibility. He said he hoped the next round of negotiations could take place soon.

Gazprom’s Miller said Ukraine must now move to a pre-payment system for gas. He said that even if Ukraine did begin paying in advance for gas, none would be delivered until at least some of what Gazprom says is a $4.5bn debt was paid.

“There is no way we are going to have a situation where we just say this $4.5bn is behind us and we have no idea when we might get it,” Miller said.

Gazprom has filed a lawsuit with the Stockholm arbitration court over the $4.5bn of back-payments it says it is owed, while Ukraine has filed its own claim in which it alleges that Kiev overpaid by $6bn in recent years.

“Ukrainians will not reach for their pockets to pay $5bn per year in order that Russia can use this money to buy weapons, tanks and planes and bomb Ukrainian territory with them,” said Yatsenyuk.

At a press conference in Moscow, Miller was visibly irate, accusing Ukraine of sabotaging the talks deliberately and calling the Ukrainian demands wholly unrealistic.

“Give us a very low price … and if you don’t then we will not pay our debts, we will just take gas for free, we will take however much we feel like,” said Miller, characterising his view of the Ukrainian negotiating position.

However, he said Ukraine had promised to fulfil all transit requirements, and refused to say what the Russian response would be if Ukraine did take gas meant for European consumers.

“We will deliver exactly what is asked for by our European partners,” Miller said.