PHRASAL VERB OF THE DAY:

To come out: meaning: to reveal that one is a gay man

Ian Thorpe COMES OUT as gay in Parkinson interview 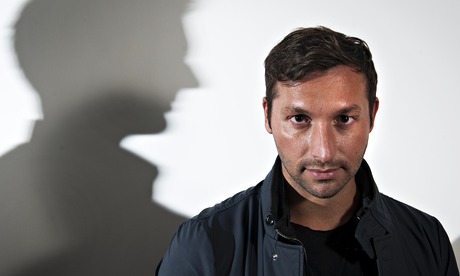 Ian Thorpe in 2012. At aged 14, he became the youngest ever male to represent Australia. Photograph: Tom Jenkins/Getty Images

After years of denial, swimming champion Ian Thorpe has revealed he is gay in an exclusive interview with Sir Michael Parkinson. The five-time Olympic gold medallist and Australia‘s most successful Olympic athlete to date, has revealed his sexuality in an interview to be aired on Australian television on Sunday night.

According to Australian newspaper the Sunday Telegraph, Thorpe, 31, who retired from swimming in 2012, “confirms his sexuality” and “has bravely revealed he is gay” during a tell-all interview. A teaser clip released by Australia’s Network Ten shows Parkinson asking the swimmer: “You’ve always said that you’re not gay. Is all of that true?” The camera then shifts to an uncomfortable looking Thorpe, who contemplates his response.

Thorpe, known as the “Thorpedo” for his prowess in the swimming pool, broke 22 world records and won five Olympic gold medals. At the 2000 Sydney Olympics, he won three gold and two silver medals, making him the most successful athlete at the Games. He also won 10 gold medals at the Commonwealth Games.

The interview, which Parkinson has described as one of the best he has conducted, also details the swimmer’s battle with depression, drugs and alcohol, which caused him to check into a rehabilitation unit earlier this year.

The revelations are dramatic particularly because Thorpe has always vehemently denied rumours of his homosexuality. In his own autobiographyThis Is Me, published in 2012, the swimmer said that he found questions about his sexuality hurtful, writing: “For the record, I am not gay and all my sexual experiences have been straight. I’m attracted to women, I love children and aspire to have a family one day … I know what it’s like to grow up and be told what your sexuality is, then realising that it’s not the full reality. I was accused of being gay before I knew who I was.”

This came after years of public denials, including a statement issued in 2009 by his management company: “In the past, on several separate occasions, I have answered questions about my sexuality openly and honestly with the media … my situation in this regard has not changed,” he said. And in July 2011 he told the Sunday Times: “I don’t think anybody has a right to write about [my private life], but I don’t care enough about it to be bothered. If you try and fight it, you’re damned; if you don’t, you’re damned. If you get married, it’s a sham.”

Parkinson said Thorpe’s decision that no question was off limits was brave and says he examines the good times and the bad of the Australian swimming legend. 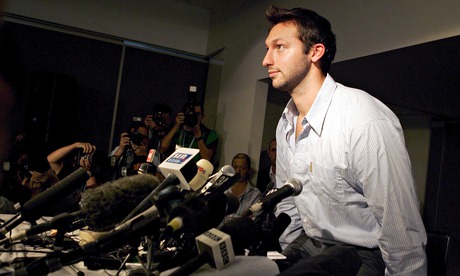 In his autobiography published in 2012, Thorpe said ‘for the record, I am not gay’. Photograph: Bernd Thissen/EPA

“His fight against depression offers a unique insight into the darker side of celebrity and success,” Parkinson said in a statement released by Network Ten.

“Ian Thorpe has always been near the top of my list to interview. The reasons are obvious. Not many athletes can claim to be the best of all time. Ian can.

“What fascinates me most about Ian is that, apart from the very beginning of his career, he never seemed to enjoy and celebrate his success … The story of a boy who was a teenage world champion, conquered the world and then seemed to give it all away is a fascinating and intriguing one.”

Aged 14, Thorpe became the youngest male to represent Australia. His victory in the 400m freestyle at the 1998 Perth World Championships made him the youngest individual male world champion. After that, Thorpe became master of the 400m freestyle, winning the event at every Olympic, World, Commonwealth and Pan Pacific Swimming Championships until his break after the 2004 Olympics.

He originally retired from swimming in 2006, aged 24, due to waning motivation. He attempted a comeback in 2011 and 2012, but failed to qualify for the London Olympics. It was subsequently announced that he was targeting qualification for the 2013 World Championships in Barcelona and later the 2014 Commonwealth Games in Glasgow but was forced to abandon his plans due to a shoulder injury that almost cost him his arm.

He has, however, enjoyed success as a sports commentator and worked for the BBC during the London Olympics. He will also be part of Network Ten’s Commonwealth Games commentary team this month.

The revelation sparked a frenzy on social media, with many coming out in support of the swimmer. “Ian Thorpe we’re proud of YOU Regardless of sexuality, achievements, medals or anything else … You’re an Aussie who we’ll love & stand by,” @2dayFMbreakfast wrote on Twitter. “Big love to @IanThorpe!” tweeted @GayTimesMag.

“‘I can only hope Thorpe’s revelations help millions of teens struggling inside themselves to find the courage to be them. Snaps for Thorpie,” wrote Lady Catherine @KadyLio, while Anthony Venn-Brown @gayambassador tweeted: “Life’s much brighter on this side of the closet @IanThorpe. Welcome to being you.”

Guardian Debate: Is there a gay gene and should we care?