Who will pay for the reconstruction of Syria? 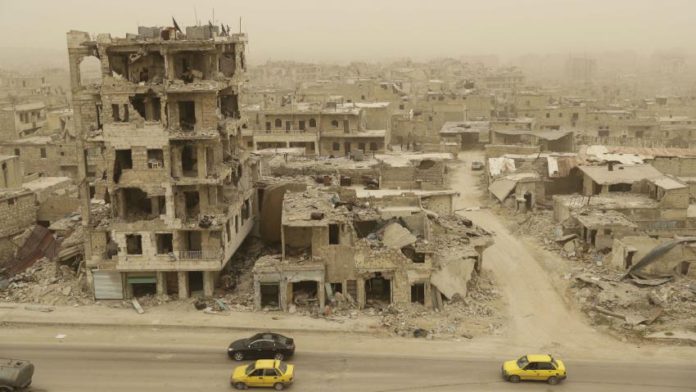 The United Nations (UN) estimates that the reconstruction of Syria will cost more than 210 billion euros. The bill is high because 7 years of civil war have destroyed a large part of the country and the lives of its people. In this regard, the data and facts provided by the international organizations are overwhelming: 70% of the population has been displaced. 5.6 million have fled Syria and 6.6 million are internally displaced persons, 69% of the Syrians live in extreme poverty, more than 13 million need humanitarian help and 6.5 million suffer from food poverty.

However, in recent months Syria is beginning to see the light at the end of this long dark tunnel thanks to the stability of larger zones in the country. As a matter of fact, since the army and the Kurdish forces have managed to control the big cities and have defeated the Islamic State in the less populated regions, the military operations are concentrating in the region of Idlib. Therefore, even though the war continues, the return of the peace in many regions should start to give way to the arrival of international funding to raise this country from its ashes, and allow the return of those who have been displaced.

The EU insists that Assad must go

In this context, the European Union (EU) and the UN took part in a donor conference held in Brussels in April. However, the aim of the summit wasn’t to agree on which amount the EU, the US,and their allies must contribute to draw the Arab country from the well of bad decisions the leaders of these countries have sunk it in. The summit was focused on putting political pressure on the Syrian government. Washington and several European capitals insist on conditioning the international aid on the resignation of the Syrian president Bashar al-Assad. This in accordance with the UN Security Council Resolution 2254 adopted on 18 December 2015, urging all parties to negotiate and agree on a political transition.

In another moment of the conflict, the Western pressure could have put the Syrian regime between a rock and a hard place. But Damascus is winning the war and does not have any incentive to give ground to the rebels. Moreover, the current international scene allows the regime to seek financial assistance from the countries that view the presidency of Assad with complicity, friendliness or, simply, with indifference. This is the case of Iran, Russia and China, respectively. The first two countries have invested many economic, logistic and human resources in defending the Syrian government from the onslaught of the rebels. Iran has managed to have 70,000 combatants in Syria, while the Russian aviation and its missiles have defended the stability of the regime and the security of the only Russian maritime installation in the Mediterranean, in Tartus, since 2015. It is estimated that the war has cost Moscow more than 430 million euros.

Yet Russia and Iran have not contributed great amounts of money for reconstruction. Rather, they have started to collect parts of their war bill. For example, Russia has acquired the rights for the exploitation of the phosphate mines and several oil fields. Thus, a good part of the wealth that these resources generate will not be intended for reconstruction because they will end up in the hands of Russian companies. In this context, Moscow is not as interested in building housing for the displaced people nor in reconstructing the water system of the cities as they are in building the rail line that will join the phosphate mines and the port of Tartus. For their part, the government of Tehran has signed contracts for thereconstruction of the telephone network and electrical plants. Officials in Iran said that they are prepared to start transferring credit to their ally in Damascus but that money in exchange must be intended exclusively to buy Iranian products.

Syria wishes that its third ally make more of a contribution But China will reach as far as its interests are protected, without actually engaging in anything. China has found a new opportunity in Syria to strengthen the Belt and Road Initiative launched in 2013 by the government of Beijing. We recently analyzed this project in relation to Egypt. It is a political-economic project for commercial integration intended to guarantee and to reinforce direct communication between Asia and Europe with the objective of weakening the United States (US) hegemony in the region.

As a consequence of the Western isolation suffered by Syria for years, China has become the main commercial ally of Damascus. The meetings between Chinese and Syrian dignitaries are frequent and very cordial. To such an extent that the Syrian ambassador in Beijing stated to the press that Chinese companies will have priority in accessing contracts related to reconstruction.

In short, the funds for reconstruction are not ensured. Besides, the Syrian regime does not expect any gesture of generosity from the West. In this sense, the government of Damascus has insisted that they will not hire companies from countries that have given support to the revolt. While at the local and regional levels, business opportunities will be reserved for the businessmen who have remained faithful to the regime.

The US use the Kurds for suffocating Damascus

In parallel, even though the US cannot defeat Assad and has no backup for the current dictatorship, they have already put their boots and their tanks on the ground in order to use the Kurds in their favour. Washington started to collaborate with the Kurdish militias People’s Protection Units (YPG) in the year 2014. Back then, they helped the YPG face the offensive of the Islamic State on Kobane. The heroic resistance of that border city with Turkey introduced the fight of the Kurds of Syria to the West. It also popularized the system of government that proposes the YPG for the region at an international level. They call it Democratic Confederalism and it’s based on the self-organization of the civil society at the local level.

Since then, the US has made a strong commitment with the Kurdish militias. Under its protection, the Syrian Democratic Forces (SDF) were created in 2015. The SDF consist basically on the Kurdish People’s Protection Units (YPG), but there is also presence of Arabs and members of other communities.

The goal of the US was to create a military force that could gain ground to the Islamic State out of the Kurdish areas, as much to the south as possible. The US knows that, for the time being, any territory occupied by the SDF will not be occupied and controlled by the Syrian government. The strategy of Washington is based on its obsessive idea of weakening the influence of Iran in the region through the attack on its allies.

At present, the US-SDF coalition controls the third of Syria where water, oil and gas sources are concentrated. And Damascus needs these regions and these resources for the reconstruction of the rest of the country. This question directly affects Iran, the unconditional ally of the Syrian regime, because Tehran cannot afford the luxury of assuming the cost of the reconstruction of the Syrian urban zones controlled by the regime on its own.

Not assisting will extend the crisis in Syria

The more time that passes without the EU and the US deciding on a plan for Syria, more dilemmas will be laid out on the West’s table. Seven years ago the dilemma was the choice between president Assad and the opposition groups. Over the years the opposition has been reduced to a bunch of Islamist militias. Now the aid for the reconstruction has set in.

If help is not offered to Syria, the suffering of the Syrian people will be extended. The refugees will knock on Europe’s door with more persistence, our companies interests will be damaged, and the possibility of the EU and the US deciding on anything about the future of Syria will be reduced. In short, this situation will reinforce the regime that they have been fighting in a quite clumsy way.

Unfortunately, denying aid to Syria is precisely what the ruling class of the US wants to do as a consequence of its fixation on Iran. Politicians and American think tanks are not capable of analyzing the situation with calm because they have been blind by an obsessive fight to weaken Iran and all its allies. That is, they have imposed on themselves the destruction of the regimes of Iran and Syria as an objective for the Middle East, without knowing how they could make it and without analyzing the consequences.

On the other hand, their collaboration in the reconstruction of Syria would reduce the pressure of the refugees on Europe and other countries in the region. Western companies would have some possibility to access the numerous contracts that will emerge. This would imply -what a disgrace!- that the Western governments should recognize that they have failed in its obstinate will to overthrow Al-Assad. And also, that they have made a mistake on faulting him for all the evils of the Middle East.